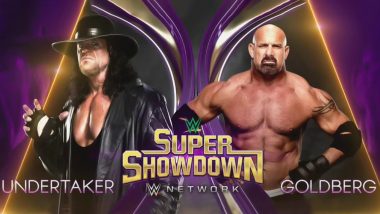 World Wrestling Entertainment (WWE) will go back into the old era where legendary wrestlers Undertaker and Goldberg will clash against each other for the first time ever in wrestling history. WWE Super ShowDown will take place for the on Friday, June 7, 2019, at King Abdullah Sports City Stadium in Jeddah, Saudi Arabia. Last time this event was held on Oct 6, 2018, at Melbourne Cricket Ground, Australia. Tonight's ShowDown will also feature matches like Triple H vs Randy Orton and other championship matches. Meanwhile, if you are looking for free live streaming of WWE Super ShowDown 2019 along with match card, then scroll down below for details. WWE RAW April 8, 2019 Results and Highlights: The Deadman Undertaker Appeared on the Show Just a Night After WrestleMania 35 (Watch Videos)

We will also be able to witness Universal Championship and WWE championship match at WWE Super ShowDown 2019. Set Rollins will defend his title against Baron Corbin, however, that is not much threat for Rollins, he might lose his championship belt when Brock Lesnar cashes in his 'Money in the Bank' contract. The Beast Incarnate brutally assaulted Seth Rollins on this past week on Raw and said that he will cash in his contract on WWE Super ShowDown. Triple H vs The Undertaker at WWE Super Show-Down: After 'End of an Era' at Wrestlemania 28, Fans Gear Up For 'Last Time Ever' Match in Australia.

The World Champion from Blue Brand of WWE Kofi Kingston was also assaulted by Dolph Ziggler last week on SmackDown. Kingston will defend his title against Ziggler tonight on WWE Super ShowDown. The other interesting match to watch at tonight event will be between Roman Reigns and Shane McMahon. Roman Reigns Birthday Special: Fitness Secrets of ‘The Big Dog’ of WWE Who Fought Cancer Like a Boss.

Undertaker and Goldberg face-off this past week on SmackDown

.@Goldberg certainly sent the #Undertaker a message ahead of their Match at #WWESSD. #SDLive pic.twitter.com/Bqwlo2rYyg

"I will claim your soul for all of eternity... @Goldberg, YOU'RE NEXT!" - #TheUndertaker #RAW #WWESSD pic.twitter.com/cEPhlCYSv8

Brock Lesnar destroying Seth Rollins this past week on Raw!!!

Dolph Ziggler interrupts Kofi Kingston this past week on SmackDown

"THIS IS ABOUT ME!"@HEELZiggler interrupts @TrueKofi #SDLive to explain why he is the way he is... pic.twitter.com/54WqXc9UzK

Viewer in the United Kingdom can watch live action from 6 PM as per the local time in the UK. While fans in the USA can catch up with WWE Super ShowDown main event from 1 pm. Stay tuned to Latestly for more updates and results from WWE Super Showdown.

(The above story first appeared on LatestLY on Jun 07, 2019 09:01 PM IST. For more news and updates on politics, world, sports, entertainment and lifestyle, log on to our website latestly.com).