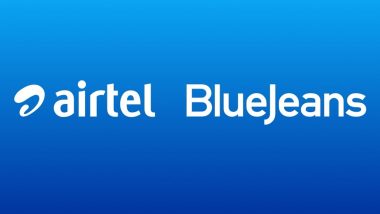 Mumbai, July 14: To take on Jio's newly launched video conferencing app JioMeet and Zoom, Airtel on Tuesday partnered with US-based telecom giant Verizon to bring its BlueJeans video conferencing platform in India. Unlike JioMeet which is for enterprise and end customers, Airtel BlueJeans is available only to the enterprises. It is similar to video-conferencing platforms like Microsoft Teams and Cisco WebEx that are only available to businesses.

According to the official announcement, Airtel Bluejeans will be free for the first three months. Customers need to register on the Airtel site and their free trial will be activated within 24 hours of registration. Airtel Payments Bank CEO Anubrata Biswas Says Revenue Up 87% to Rs 474 Crore During FY20, Sees Headroom for Growth.

Airtel Partners With Verizon to launch BlueJeans in India:

As part of its integrated B2B play, @airtelindia is partnering with @Verizon to offer “Airtel BlueJeans” range of #videoconferencing solutions to enterprises in India: https://t.co/BGtlPqLRyI #meetings pic.twitter.com/ufrgQmR2lq

“The pricing will be segmented at three levels, for large enterprises, medium enterprises, and for really tiny companies, which will be bundled with existing broadband and Internet plans," said Gopal Vittal, CEO, Bharti Airtel, in a statement.

Airtel BlueJeans will come up with enterprise-grade security. It will also have features such as real-time meetings analytics. Apart from this, users also get dial-in options starting at 50 paise per call. The platform supports upto 150 presenters and 50,000 attendees. Similar to rival video conferencing platforms, it is designed to work across desktop, tablet and mobile platforms.

(The above story first appeared on LatestLY on Jul 14, 2020 05:42 PM IST. For more news and updates on politics, world, sports, entertainment and lifestyle, log on to our website latestly.com).