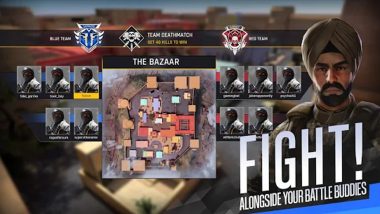 Bullets will fly when #FAUG face their dushman in deadly team battles!

Akshay had launched the mobile action game Fearless and United Guards (FAU-G) on the occasion of India's 72nd Republic Day in January this year. The game has been developed by Bangalore based studio nCore Games, with a concept by Akshay himself. The FAU-G game is available on the Google Play Store and Apple App Store.

The game was first announced by Akshay Kumar in September 2020, post PUB-G ban.

While announcing the same, the actor had tweeted, "Supporting PM @narendramodi's AtmaNirbhar movement, proud to present an action game, Fearless And United-Guards FAU-G. Besides entertainment, players will also learn about the sacrifices of our soldiers. 20 per cent of the net revenue generated will be donated to @BharatKeVeer Trust #FAUG".

(The above story first appeared on LatestLY on Jun 28, 2021 10:57 AM IST. For more news and updates on politics, world, sports, entertainment and lifestyle, log on to our website latestly.com).