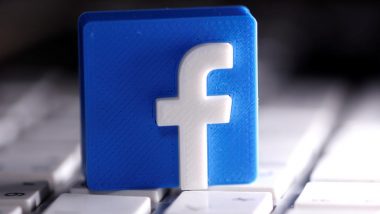 San Francisco, September 23: Facebook has removed two separate networks of fake accounts and pages, one originating in China and the other in the Philippines. The one network that originated in China targeted US presidential candidates Joe Biden and Donald Trump, although the network hardly gained any following in the US, Facebook said on Tuesday. The social networking giant said both the operations violated its "policy against coordinated inauthentic behaviour".

In each case, the people behind this activity coordinated with one another and used fake accounts as a central part of their operations to mislead people about who they are and what they are doing, Nathaniel Gleicher, Facebook's Head of Security Policy wrote in a blog post on Tuesday. Facebook Row: Congress Leader KC Venugopal Demands Probe by Parliamentary Committee Into Allegations Against Social Media Giant.

This activity that originated in China focused primarily on the Philippines and Southeast Asia more broadly, and also on the US. This campaign took operational security steps to conceal their identity and location including through the use of VPNs (virtual private networks).

In Southeast Asia where this network focused most of its activity, they posted about global news and current events including Beijing's interests in the South China Sea; Hong Kong; content supportive of President Rodrigo Duterte and Sarah Duterte's potential run in the 2022 Presidential election, among other issues.

In the US, where this network focused the least and gained almost no following, they posted content both in support of and against presidential candidates Biden and Trump.

"Although the people behind this activity attempted to conceal their identities and coordination, our investigation found links to individuals in the Fujian province of China," Gleicher said.

They posted in Filipino and English about local news and events including domestic politics, military activities against terrorism, pending anti-terrorism bill, criticism of communism, youth activists and opposition, the Communist Party of the Philippines and its military wing the New People's Army, and the National Democratic Front of the Philippines, it added.

(The above story first appeared on LatestLY on Sep 24, 2020 03:27 AM IST. For more news and updates on politics, world, sports, entertainment and lifestyle, log on to our website latestly.com).