Fake Apple AirPods Worth $7.16 Million Seized in the US: Report

The US Customs and Border Protection (CBP) officers in Cincinnati have seized three large shipments from China that contained fake Apple AirPods, which are estimated to be worth around $7.16 million. 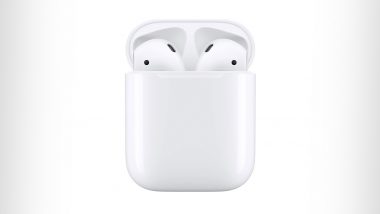 San Francisco: The US Customs and Border Protection (CBP) officers in Cincinnati have seized three large shipments from China that contained fake Apple AirPods, which are estimated to be worth around $7.16 million. A total of 36,000 fake AirPods were seized, each shipment containing 12,000 units, on May 6, according to an official release issued by the US CBP. Although each package had a declared value of $5,280, the Manufacturer's Suggested Retail Price for all the AirPods would have been $7.16 million had they been genuine. Apple AirPods 3 & iPad Pro 2021 Likely to Arrive by Next Month: Report.

After consulting with an import specialist from CBP's Center of Excellence and Expertise, the items were found to violate CBP trademark and copyright codes and were seized on May 11 and 13.

It goes on to explain that Apple has configuration trademarks on their AirPods and has recorded those trademarks with CBP, reports Gizmo China. It also adds that a company does not have to put the "Apple" wordmark or design on their products to violate these trademarks. In this instance, further inspection of the earbuds revealed that their shape and design replicated the protected Apple configuration.

Apple AirPods is one of the bestselling products from the tech giant with shipments of about 114 million units in 2020. The company has a dedicated anti-counterfeit team working which is tasked with the removal of knock-off Apple products. Last year, the team managed to take down more than a million product listings for fake Apple goods.

(The above story first appeared on LatestLY on May 19, 2021 09:37 AM IST. For more news and updates on politics, world, sports, entertainment and lifestyle, log on to our website latestly.com).