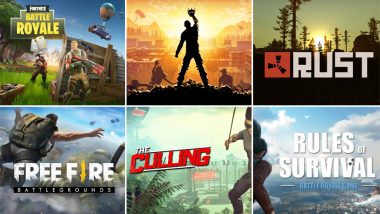 We have come far from the conventional video games to high-end ones. Since the year 1980, the video games became an important part of the entertainment industry. With the ever changing technology, the video games too have evolved, which has increased the demand for the games since 2015. Today is an era of high-end video games and there are several games available in the market, be it online or offline. One such game is PlayerUnknown's Battlegrounds aka PUBG that has gained popularity in less time. It is a popular online multiplayer battle royale game that is available on every platform, be it PC, XBOX, Playstation and even smartphones. Today, we will not be talking about PUBG, rather we will be listing seven best alternatives to the online games. Let's get started! PUBG Lite Beta Version Coming To Four More Countries; To Be Rolled Out From February 13

Fortnite: Fortnite is an online video game, which is developed by Epic Games. Released in the year 2017, Fortnite is available across all platforms like Android, iOS, Nitendo Switch, Windows, macOS, PS4, Xbox One. Initially, Fortnite: Save The World was limited to certain platforms only. The video game has become a huge hit as the company attracted over 125 million players in less than a year and earned hundreds of millions of dollars each month. Fortnite: Battle Royale is a free-to-play battle royale game where up to 100 players fight to emerge as the last person standing. Playing PUBG and Fortnite Has Benefits? Expert Says Yes, But…

The Culling: Another popular alternative of PUBG is 'The Culling'. This battle royale game is developed by American studio Xaviant. Released in 2017, the online game is available on selected platforms like Linux, MS Windows and XBox One. The gameplay of this video game is very much similar to PUBG and Fortnite, as 16 players enter into an arena featuring buildings containing loots that helps in surviving.

Free Fire: Offering similar gameplay as that of PUBG, Free Fire is also popularly known as Garena Free Fire. This action adventure battle royale game is developed by 111dots Studio and it was released in the year 2017. This video game is available on Android as well as iOS platforms only. With 50 players entering into the gameplay only one will survive.

H1Z1: Developed and published by Daybreak Game Company, H1Z1 is a free-to-play battle royale game that can be another alternative to PUBG. This game was officially released in the year 2018 as a free-to-play game that was later on introduced on PS4 and Xbox One. Originally in the year 2015 as an early access, the gameplay brings 100 players together for competing against each other. The game also offers several options wherein players can play solo, duo or in a group of five to survive as a last man or last team.

Rules of Survival: Rules of Survival aka RoS is another free-to-play game that offers gameplay similar to PUBG. This online multiplayer game is developed NetEase Games and the game already has over 150 million players registered globally. Like all battle royale games, the RoS game offers nothing different. Every single player or team fights to become the last man or team standing. The online game offers 4 different modes wherein the players can select any one - solo, duo, squad and Fireteam.

Rust: Available on Microsoft Windows and macOS, Rust is also multiplayer battle royale game which can be alternative to PUBG. Developed by Facepunch Studios, the game was released in the year 2018. The players have to survive in the wilderness by using the resources available, looting Radtowns, collecting components, building own base and eliminating enemies.

Darwin Project: This is another free-to-play online battle royale game which is available on Microsoft Windows and Xbox One. Developed by Scavengers Studio, the company is eyeing for full release for PC in 2019. The objective of the player is surviving the dangerous environmental conditions, tracking own the enemy, setting traps, winning the favor of a voting crowd and more.

(The above story first appeared on LatestLY on Feb 18, 2019 05:59 PM IST. For more news and updates on politics, world, sports, entertainment and lifestyle, log on to our website latestly.com).