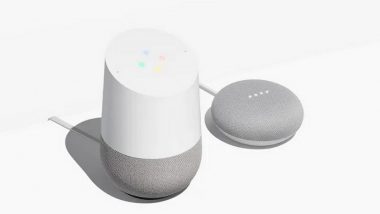 The smart speaker space in the domestic market has been promising one and is currently been dominated by Amazon with its Echo speaker lineup - Echo, Echo Plus, and Echo Dot that has been on sale since last November. The main underline of the new Home Devices is its ability to recognise people as per their voices and customising the experience according to that user. Moreover, the users can also use the devices for making hands-free calls from their numbers.

Talking about the new Google Home, the smart speaker sports a cylindrical shape with overall dimension of 233.4 x 96.3 x 142.7 mm. The best part of the device is that the base comes with a fabric cover, which can be customised as per the preference. Beneath the fabric cover, the smart speaker comprises of 2 drivers and 2 passive radiators. The upper portion flaunts a white colour. Weighing about 477 grams, the device comes with 2 microphones on the sloping top edge. Supporting 802.11 b/g/n/ac Wi-Fi, the device gets 4 coloured LEDs along with white-coloured LED rings that indicates various operations.

On the other hand, Google Home Mini is basically a much compact version of Google Home which will be a direct competition to Amazon's Echo Dot that went on sale last November. The smaller device is offered in 3 shades - Coral, Charcoal and Chalk. Weighing about 173 grams only, the device comes with 4 LED lights at the top which indicates operational functioning. Likewise the bigger smart speaker, the Google Home Mini too requires power source for connecting to Wi-Fi networks. Compatible with Chromecast, the speakers housed inside the Mini aren't that powerful yet it can perform all the other voice related functions like Google Home.

Both the smart speakers will be available for purchase exclusively via Flipkart as well as offline stores. Both the devices will support Google Play Music, Saavn, Gaana, YouTube and Netflix for the domestic market. Moreover, Hindi support is expected to be added to Google Home speakers on the later stage. However, the company has no immediate plans to launch bigger Google Home Max speaker in India.

(The above story first appeared on LatestLY on Apr 11, 2018 09:48 AM IST. For more news and updates on politics, world, sports, entertainment and lifestyle, log on to our website latestly.com).