Microsoft, which unveiled Windows 11 last week, might roll out the OS on October 20, the media reported. Earlier, the company said that the new OS will be a free upgrade for Windows 10 users and will start rolling out "this holiday". 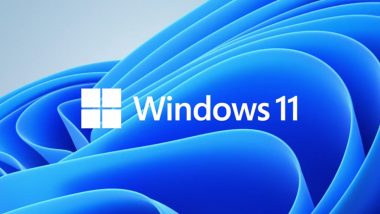 And the official promo materials from Microsoft on the Windows 11 website feature the date October 20 in the taskbar, GSMArena reported.

Earlier, the company said that the new OS will be a free upgrade for Windows 10 users and will start rolling out "this holiday". According to the company, Windows 11 is made for gamers as it unlocks the full potential of the system's hardware, putting some of the latest gaming technology to work.

With a high-performance NVMe SSD and the proper drivers, Windows 11 can soon load new games faster than ever thanks to a breakthrough technology called DirectStorage, which we also pioneered as part of the Xbox Velocity Architecture featured in the Xbox Series X and Xbox Series A, the company said.

The company introduced Chat from Microsoft Teams integrated into the taskbar. With this, users can instantly connect through text, chat, voice or video with all of their personal contacts, anywhere, no matter the platform or device they're on, across Windows, Android or iOS.

(The above story first appeared on LatestLY on Jun 29, 2021 10:08 AM IST. For more news and updates on politics, world, sports, entertainment and lifestyle, log on to our website latestly.com).