Motorola, the Lenovo-owned tech giant, is rumoured to launch the Moto 200 smartphone soon. Ahead of its launch, specifications of the handset have been leaked online. 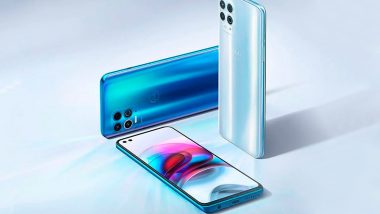 Motorola, the Lenovo-owned tech giant, is rumoured to launch the Moto 200 smartphone soon. Ahead of its launch, specifications of the handset have been leaked online. As per Evan Blass' tweet, Moto G200 is codenamed as Yukon. Also, a German publication TechnikNews has revealed that Motorola's upcoming phone could be launched next month. The device will be introduced as the successor to the Moto G100 that was launched in China this March. Motorola Moto E40 Goes on First Sale via Flipkart; Check Prices, Offers & Specifications.

According to a new report, Moto G200 might be launched in China as Motorola Edge S30. The smartphone is said to come with a triple rear camera setup, a 108MP S5KHM2 sensor from Samsung. The other two modules might comprise a 13MP macro lens and a 2MP depth snapper. At the front, there could be a 16MP selfie shooter.

Moreover, Moto G200 is rumoured to sport an FHD+ display with a refresh rate of 144Hz. The handset is said to be powered by a Qualcomm Snapdragon 888 processor paired with 8GB of RAM. Apart from this, nothing more is known. We expect the company to start teasing the Moto G200 phone before its launch.

(The above story first appeared on LatestLY on Oct 26, 2021 06:10 PM IST. For more news and updates on politics, world, sports, entertainment and lifestyle, log on to our website latestly.com).