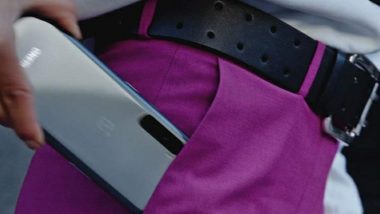 OnePlus, the Chinese smartphone manufacturer will be launching its highly awaited affordable smartphone, OnePlus Nord in the India market soon. As we know the new OnePlus Nord smartphone will be launched initially in Europe and India, the handset was made available for pre-order in Europe this week. The company is leaving no stones unturned to create the much-desired hype for the upcoming smartphone, and the company has managed to achieve the same with some naming quest. OnePlus Nord Smartphone To Be Powered by Qualcomm's Snapdragon 765G Chipset: Report.

Moving further, the company has revealed the first image of the OnePlus Nord smartphone, which is expected to be launched soon. The company revealed the first image of the phone via Amazon and a video posted on Instagram. Going by the rumours, the company will be launching the smartphone in India on July 10, 2020. The first teaser image gives a clear glimpse of the rear profile, as it features a vertically-aligned rear camera module along with OnePlus insignia in the centre.

The company through its official Instagram account confirmed that the OnePlus Nord pre-orders will begin in India soon. However, the company hasn't revealed any exact dates regarding the sale of the device in the country. OnePlus Nord Pre-Bookings to Open Today at 1.30 PM IST, Reportedly to Be Launched on July 10.

As far as the specifications are concerned, the OnePlus Nord is expected to get a 6.55-inch OLED display with 90Hz refresh rate. It will be powered by 5G-compatible Snapdragon 765G chipset, which will be mated to a 6GB of RAM and 128GB of internal storage. The rear module at the back will comprise of a 48MP main camera with a 16MP wide-angle camera. More details are expected to be revealed by the company ahead of its launch.

(The above story first appeared on LatestLY on Jul 04, 2020 08:28 PM IST. For more news and updates on politics, world, sports, entertainment and lifestyle, log on to our website latestly.com).