OnePlus announced the launch date of the Nord CE 2 5G phone earlier today. Ahead of its launch, the price has been leaked online by tipster Abhishek Yadav. 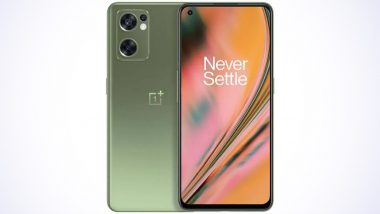 According to Yadav, OnePlus Nord CE 2 5G will be available in two variants - 6GB + 128GB and 8GB + 128GB. The former will be priced at Rs 23,999, whereas the latter will cost Rs 24,999. The device will be introduced as the successor to the Nord CE phone, which was launched last year.

According to a report from MySmartPrice, the handset will feature a 6.43-inch FHD+ AMOLED display with a refresh rate of 90Hz. It will be powered by MediaTek Dimensity 900 5G SoC coupled with up to 8GB of RAM and 128GB of internal storage. For photography, the phone will get a 64MP primary lens, an 8MP ultra-wide-angle lens and a 2MP snapper. Upfront, there will be a 16MP lens for selfies and video calls. OnePlus Nord CE 2 5G will pack a 4,500mAh battery with 65W SuperVOOC fast charging support.

(The above story first appeared on LatestLY on Feb 10, 2022 05:28 PM IST. For more news and updates on politics, world, sports, entertainment and lifestyle, log on to our website latestly.com).