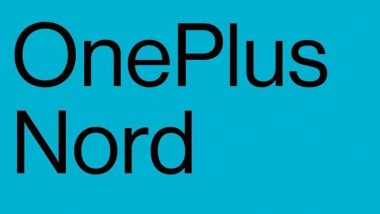 We previously reported that OnePlus' affordable smartphone - Nord was made available for pre-order earlier today for select markets. However, it is important to note that the smartphone is still a major mystery here, as the company hasn't revealed anything about the device apart from its name. Even the official name of the phone was confirmed by the company on Tuesday through its documentary video underlining 'New Beginnings'. The smartphone will be initially available in Europe and India. It is expected to be launched in India by next week. OnePlus Nord Smartphone Sold Out on Amazon.in & OnePlus.in, Next Phase of Pre-Orders on July 8.

Excited to be working with @OnePlus as they embark on #NewBeginnings powered by the Qualcomm Snapdragon 765G 5G mobile platform #OnePlusNord https://t.co/1Eitm4GJSI

Ahead of its official launch, the company's co-founder Carl Pei has confirmed that the OnePlus Nord will come powered by Snapdragon 765G SoC. Also, the same has been confirmed by Qualcomm's UK unit through a tweet. Moreover, Carl Pei disclosed the presence of 5G chipset from Qualcomm in the Nord during an interview with an online publication.

According to a report from TechRadar, Carl Pei revealed that the upcoming OnePlus Nord affordable smartphone will come powered by Qualcomm Snapdragon 765G SoC. Though the Snapdragon 765G is certainly not as powerful as the Snapdragon 800 series SoCs, it will help the company in keeping phone's price down without compromising too much on the performance aspect.

There were many theories about the new OnePlus phone. Lite wasn’t quite right. Z wasn’t either. Meet Nord. OnePlus Nord.⁰⁰ #OnePlusNord #NewBeginnings

Carl Pei also mentioned during the interview that camera is probably the most used feature of a smartphone, and the company is bringing a flagship-level camera experience to the mid-range price range with OnePlus Nord. So, this hints that the Nord will be taking cues from OnePlus 8 Series in the camera department. OnePlus Nord Pre-Bookings to Open Today at 1.30 PM IST, Reportedly to Be Launched on July 10.

Previous reports claim that the OnePlus Nord will come with up to 12GB of RAM, quad rear camera module, dual selfie-cameras and more. The upcoming OnePlus Nord smartphone will cost less than $500, which is around Rs. 37,800. The smartphone was made available for pre-order via the OnePlus UK website, and it was sold out immediately. The next two rounds of pre-orders are slated on July 8 and July 15 respectively.

(The above story first appeared on LatestLY on Jul 01, 2020 10:47 PM IST. For more news and updates on politics, world, sports, entertainment and lifestyle, log on to our website latestly.com).