Poco, the Chinese smartphone maker has officially teased its F3 GT device for the Indian market. The The Chinese brand released a 15-second video teaser mentioning the name F3 GT. 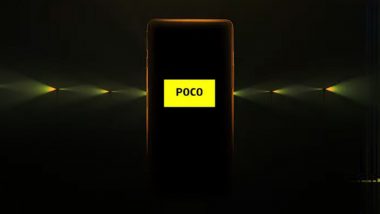 Poco, the Chinese smartphone maker has officially teased its F3 GT device for the Indian market. The Chinese brand released a 15-second video teaser mentioning the name F3 GT. A recent report tipped that the phone will be launched in the first two weeks of this month. Now the company has started teasing the phone which hints towards its imminent launch. The upcoming Poco F3 GT is said to be a rebranded version of the Redmi K40 Game Enhanced Edition smartphone which is currently available in China. Poco F3 GT Likely To Be Launched in India Next Month: Report.

If the recent reports are to be believed then Poco F3 GT will feature a 6.67-inch FHD+ AMOLED display with a resolution of 2400x1080 pixels. It is expected to come powered by a MediaTek Dimensity 1200 SoC with up to 12GB RAM and up to 256Gb of internal storage.

For photography, it might sport a 64MP main camera, an 8MP ultra-wide-angle and 2MP macro snapper. At the front, there could be a 16MP shooter for selfies and video calls. The upcoming phone is expected to come packed with a 5,065mAh battery with 67W fast charging support. Other features might include Bluetooth 5.2, Wi-Fi 6, GPS/ A-GPS/NavIC and a USB Type-C port. The device is likely to run on an Android 11 based MIUI 12 operating system.

(The above story first appeared on LatestLY on Jul 08, 2021 05:08 PM IST. For more news and updates on politics, world, sports, entertainment and lifestyle, log on to our website latestly.com).