Redmi India has confirmed to launch the 11S smartphone on February 9, 2022. The company released a poster on its official Twitter account, revealing its launch date along with the back panel. 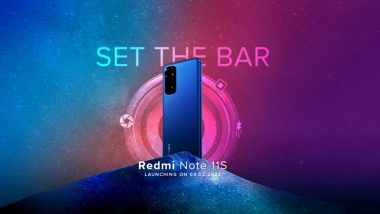 Redmi India has confirmed to launch the 11S smartphone on February 9, 2022. The company released a poster on its official Twitter account, revealing its launch date along with the back panel. A dedicated microsite has also been set up on the Xiaomi India website, which is yet to announce key features of the phone. The launch event will commence on the above-mentioned date and will be streamed live via Redmi India's official YouTube channel. Redmi Smart TV 32-Inch & 43-Inch Models Launched in India From Rs 15,999.

According to the teaser, Redmi Note 11S can be seen in Blue colour. We also expect Redmi could introduce other shades. The poster also reveals a quad rear camera module with a 108MP primary lens.

Join us as we gear up to #SetTheBar.

According to a report from 91Mobiles, Redmi Note 11S will get a 108MP Samsung HM2 sensor, an 8MP Sony IMX355 ultra-wide-angle lens, a 2MP OmniVision macro lens and a 2MP bokeh shooter. Upfront, there could be a 13MP camera.

The handset might be powered by a MediaTek 5G SoC coupled with up to 8GB RAM and 128GB of internal storage. It is said to sport an IPS LCD display with a refresh rate of 90Hz. Redmi Note 11S is likely to run on Android 11 based MIUI 12.5 OS. Apart from this, nothing more is known. We expect Redmi India to release a few more teasers before its launch.

(The above story first appeared on LatestLY on Jan 24, 2022 03:51 PM IST. For more news and updates on politics, world, sports, entertainment and lifestyle, log on to our website latestly.com).