Samsung, the South Korean smartphone maker is rumoured to launch its Galaxy M32 smartphone in India soon. As per the Geekbench website, the handset will be powered by a MediaTek Helio G80 chipset coupled with at least 6GB of RAM. 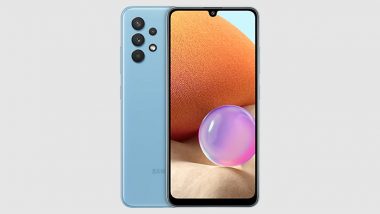 Samsung, the South Korean smartphone maker is rumoured to launch its Galaxy M32 smartphone in India soon. Ahead of its launch, the support page of the device has reportedly gone live on the Samsung India website which hints towards its imminent launch. The listing does not reveal much about the upcoming device. The handset is said to be introduced as a successor to the Samsung Galaxy M31s. The Galaxy M32 support page reveals a model number SM-M325F/DS. The handset was also reportedly spotted on the Bureau of Indian Standards site (BIS) which also reveals that the phone will be launched in India soon. Samsung Galaxy F52 5G Price & Images Leaked on Weibo: Report.

The phone is speculated to be a rebranded version of the Galaxy A32 4G which was launched in India this February. If this is true, Galaxy M32 will feature a 6.4-inch display. However, Samsung has not revealed any information regarding the device yet. We expect the company to start teasing the device before its official launch.

(The above story first appeared on LatestLY on May 26, 2021 10:19 AM IST. For more news and updates on politics, world, sports, entertainment and lifestyle, log on to our website latestly.com).