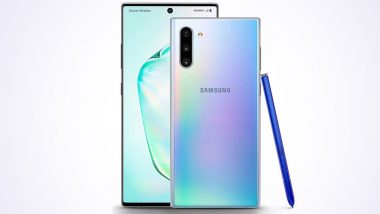 New Delhi: South Korean tech giant Samsung's Galaxy Note 10 series, including the base model and the Galaxy Note 10+, is apparently facing an issue that is affecting its S Pen. According to Gizmo China, citing SamMobiles, several users have recently started complaining about this issue. Samsung Galaxy Note 10 Lite Models’ Price Slashed by Rs 4,000.

The high-end devices from 2019 are facing an issue that causes the S Pen to disconnect now and then. This can further lead to certain functions and features not being usable within the Galaxy Note 10 series, including the Air Actions, the report said. While the problem of disconnection of the S Pen isn't exactly a new issue, the frequency at which it occurs has risen recently, it added.

A few of the Galaxy Note 10 users found that the issue started appearing after installing either the March 2021 or April 2021 security patch. As per some users, they are greeted with a disconnection error as soon as they take the S Pen out from its silo. The issue persists even if they connect the S Pen again.

Oddly, despite the S Pen getting disconnected from the Galaxy Note 10 and Galaxy Note 10+. users can still use it to navigate, scroll, and touch the screen. However, they can't use Air Actions to control the camera app, volume navigating the photos in the gallery app. From the various reports, it is clear that the problem has been popping up since mid-2020 with no solutions out right now.

(The above story first appeared on LatestLY on May 05, 2021 08:36 AM IST. For more news and updates on politics, world, sports, entertainment and lifestyle, log on to our website latestly.com).