Samsung has reportedly signed a deal with Elon Musk's electric car maker Tesla worth $436 million to let its latest camera modules to be used in Cybertruck. 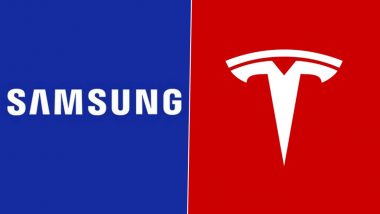 Seoul: Samsung has reportedly signed a deal with Elon Musk's electric car maker Tesla worth $436 million to let its latest camera modules to be used in Cybertruck. According to a report in Sam Mobile, the South Korean tech giant will supply the biggest electric car manufacturer in the US with its camera modules. Elon Musk Teases New Tesla UI Release: Report.

Samsung's camera modules will be used by Tesla's latest electric vehicle that was unveiled in November 2019, the reports claimed. The prototype vehicle showcased on stage wasn't equipped with conventional rearview mirrors, but instead, it used an array of cameras connected to the dashboard's displays.

The production model shouldn't be all that different from the original prototype and these reports further confirm that the Cybertruck will have a mirrorless design. The partnership between the two companies isn't new.

Earlier, Samsung has supplied Tesla with other EV-related technologies before, including batteries, and reports indicate that the new PixCell LED headlamp developed by Samsung will also be used by Tesla for its future EVs. Tesla is believed to have close to 1 million reservations for the Cybertruck at this point. Musk has confirmed that the Tesla Cybertruck will be equipped with a 4-wheel directional steering, resulting in a feature similar to the Hummer EV's 'Crab mode'.

(The above story first appeared on LatestLY on Jul 14, 2021 11:44 AM IST. For more news and updates on politics, world, sports, entertainment and lifestyle, log on to our website latestly.com).