Two Chinese astronauts have for the first time worked outside of the country's space station to install tools, the media reported. This is China's second spacewalk in the history of its space programme. 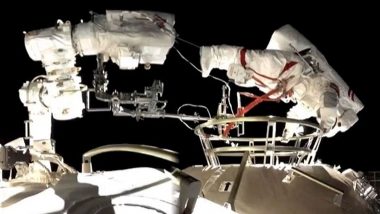 Beijing, July 6: Two Chinese astronauts have for the first time worked outside of the country's space station to install tools, the media reported. This is China's second spacewalk in the history of its space programme.

They worked for six-hour and 46-minute extravehicular activity (EVA) to install tools needed to support future activities at the space station, Space.com reported.

Boming attached a foot restraint and platform to the end of the station's 10-metre-long robotic arm and then mounted the arm himself. Shenzhou 12 commander Nie Haisheng then tested the arm's controls, moving Boming from inside the Tianhe module.

Hongbo tethered to the handrails running along the exterior of the space station, later joined Liu in extending a panoramic camera. They then continued working together to install other EVA equipment with the help of the robotic arm, the report said.

"After about seven hours of exterior activities, the Shenzhou 12 crewmates working closely together successfully completed all the scheduled tasks during the spacewalk," China's Manned Space Agency was quoted as saying.

The Shenzhou 12 mission, which launched with Haisheng, Boming and Hongbo on June 16, is scheduled to last three months. In addition to testing procedures, the EVAs are preparing the station to be expanded with the addition of two laboratory modules to be launched in 2022.

China's first-ever spacewalk was performed by Zhai Zhigang, commander of the Shenzhou 7 mission, in 2008. Boming was part of that mission's crew as well, the report said.

When not out on a spacewalk, the Shenzhou 12 crewmates have been configuring and testing the Tianhe core module's systems, conducting science experiments and participating in video downlinks, including talking live with Chinese President Xi Jinping.

When completed, the T-shaped Tiangong ("Heavenly Palace") space station will be China's first multi-module space station. In addition to hosting Chinese crews and research, China plans to invite international partners to visit and work aboard the orbiting outpost, the report said.

(The above story first appeared on LatestLY on Jul 06, 2021 12:38 PM IST. For more news and updates on politics, world, sports, entertainment and lifestyle, log on to our website latestly.com).