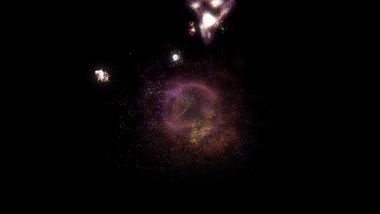 Space exploration gives so many answers to scientists. It is fascinating to know so many discoveries that further led to many studies and theories to understand galactic features, even if they are far, far away from our planet. Recently, astronomers have reportedly unearthed a ‘Cosmic Ring of Fire’ making the starts 50 times faster than the Milky Way. The super rare type of the galaxy is named R5519, which lies 11 billion light-years from the Solar System. Unlike other galaxies, which are shaped like spirals or blobs, this one looks like a giant galactic doughnut complete with a massive hole punched right through its centre. An artist’s impression on the galaxy video has circulated online, showing how it appears. Giant Orange Swirl by European Southern Observatory Shows Birth of Planet For First Time, View Pics and Video of Cosmic Spiral.

The Australian-led team of astronomers stated that this “collisional ring galaxy,” named R5519 is 11 billion light-years distant and also the first of its kind found in the early Universe. It was imaged as it existed 11 billion years ago, right after the Big Ban. Yes, the Big Bang took place reportedly around 13.8 billion years ago, R5519 was imaged three billion light-years later. Isn’t it fascinating? Solar Minimum Effect on Earth: Will Summer Be Less Hot Because of the Sun ‘Lockdown’? Here’s What You Should Know About the Phenomenon.

“It’s a very curious object that we’ve never seen before,” said Tiantian Yuan, the lead author of the study which is published in Nature Astronomy. “Most of that activity is taking place on its ring — so it truly is a ring of fire,” he added. The study explained the hole at its centre is as massive as two billion times the distance between the Sun and Earth.

This giant galaxy, R5519, is an incredible discovery as it could shake up theories about the earliest galaxies formed after the Big Bang and how galaxies evolve. The scientists in the study used spectroscopic data gathered by the W. M. Keck Observatory in Hawaii and images recorded by NASA’s Hubble Space Telescope to identify R5519’s rare structure.

(The above story first appeared on LatestLY on May 26, 2020 05:49 PM IST. For more news and updates on politics, world, sports, entertainment and lifestyle, log on to our website latestly.com).