SpaceX launched this rocket in February 2015 but after completing its mission, it did not have enough fuel to return towards Earth and instead remained in space. 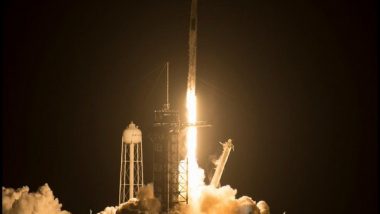 The Falcon 9 rocket, launched by Elon Musk's space exploration company has lost control and has put India's Chandrayaan and NASA's Lunar Reconnaissance Orbiter (LRO) at risk. It will be the first known uncontrolled rocket collision with the Moon. These missions of ISRO and NASA are exploring the unexplored aspects of the Moon. The Falcon 9 rocket is expected to hit the lunar surface on March 4. SpaceX launched this rocket in February 2015 but after completing its mission, it did not have enough fuel to return towards Earth and instead remained in space.  Massive Asteroid Twice the Size of Empire State Building to Zoom Past Earth at 43,000 Miles Per Hour on January 18

The rocket was deployed in 2015 to put into orbit a NASA satellite called the Deep Space Climate Observatory (DSCOVR).

According to space observers, the piece of the rocket is about 4 metric tons and it will hit the surface of the moon at a speed of 2.58 kilometers per second. Bill Gray, who monitors space activities, in his blog wrote that this rocket will crash land on the surface of the moon and its debris will not generate garbage in space. However, if the rocket explodes in space without falling on the moon, then many satellites can be damaged.

According to Gray, India's Chandrayaan-2 orbiter orbiting the Moon and NASA's Lunar Reconnaissance Orbiter can capture the fall of the Falcon 9 rocket. There is also a possibility of the debris of this rocket colliding with these two orbiters. However, astrophysicist Jonathan McDowell of Harvard University has claimed that rocket moving towards the moon is not a big deal. He wrote, “The second stage of an old Falcon 9 rocket, which was launched into high orbit in 2015, is going to hit the moon on 4 March. It's interesting, but not a big deal."   NASA's DART Asteroid Defence Mission Lifts Off Aboard SpaceX Falcon 9 Rocket

(The above story first appeared on LatestLY on Jan 27, 2022 06:56 PM IST. For more news and updates on politics, world, sports, entertainment and lifestyle, log on to our website latestly.com).