Hunter's Blue Moon 2020 Timings and How to Watch: Know All Details About Rare Full Moon Which Rises on Spooky Halloween Night

What's also special about the second full moon of this month is it rises exactly on the night of Hallows' Eve. So moon lovers definitely don't want to miss this. In this article, we tell you all details about the full moon and when you can watch it at its peak. 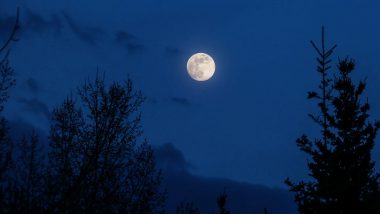 Are you ready for Halloween? The spook-themed night will have another bright addition of the rare blue moon. The month of October started with a full Harvest Moon and will end with Hunter's Moon which rises tomorrow, October 31. It is rightly called the "Once in a Blue Moon" because of the rare occurrence of a full moon day in a single calendar month. What's also special about the second full moon of this month is it rises exactly on the night of Hallows' Eve. So moon lovers definitely don't want to miss this. In this article, we tell you all details about the full moon and when you can watch it at its peak.

In the month of October, we were treated to see Mars and Moon together quite often. And at the end of the month, we are treated to the rare occurrence of Blue Moon. With the name, the moon will not have a bluish hue to it. But the second moon that occurs in a calendar month is referred to as a Blue Moon. And like every full moon of the month has a name to it, the one in October is called Hunter's Moon.

October’s second full Moon rises on Halloween October 31 and hits peak illumination at 10:51 A.M. Eastern Time. The global moment of full Moon occurs at 14:49 Universal Time / 14:49 BST / 7:49 a.m. PDT. In IST, the peak timings would be at 8.19 PM. Hunter's Moon 2020 Date and Timings in IST: Know Everything About The Rare Occurrence of Blue Full Moon on Halloween Night.

How to See The Hunter's Blue Moon?

The best time to see a full moon is around its rise in the night sky. Depending on the area you live, check out the moonrise timings. To get a clear view you will want a clear sky. A full moon does not need special equipment to observe unless you want to clearly watch the surface and craters. In that case, a telephoto lens or a telescope is required.

Why is it Rare?

The occurrence of a blue moon is not as rare. Depending on the leap year, a second full moon in a month occurs once every two to three years. But Hunter's Moon is rare because it coincides with Halloween night. The last time the world saw a full moon on the night of Halloween was back in 1944! Also, the next time we will see such a coincidence together will be in 2039. So you would not want to miss this one? Enjoy your Halloween night by stepping out to take a look at this rare full moon event coinciding with the spooky night.

(The above story first appeared on LatestLY on Oct 30, 2020 11:59 AM IST. For more news and updates on politics, world, sports, entertainment and lifestyle, log on to our website latestly.com).