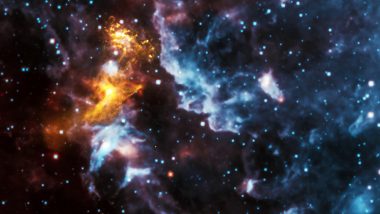 Canadian astronomers have noted some mysterious signals emanating from a distant galaxy. A telescope in Canada picked up notes of the lights which is a second-time scientist detected such a consecutive radio burst. Of the 13 Fast radio burst (FRB), there was an unusual repeating signal, coming from 1.5 billion light years away. One such an incident was recorded by a different telescope in November 2012 too.

Ingrid Stairs, an astrophysicist from the University of British Columbia (UBC) told BBC, "Knowing that there is another suggests that there could be more out there. And with more repeaters and more sources available for study, we may be able to understand these cosmic puzzles - where they're from and what causes them." The research has now been published in journal Nature along with sound frequencies recorded. Mysterious Alien Signals from Across the Universe Picked Up from a New Radio Telescope in Canada.

According to speculations, FRBs may have been caused due to exploding stars, magnetic fields or probably alien transmission. The flash lasted only for a millisecond and was ejected with the same energy level sun takes 12 months to produce. Canadian astronomers said that the one signal repeated six times from the same location. Elon Musk Sent Aliens on Mars According to Famous UFO Hunter? View Pic of Alien Bots Captured by Curiosity Rover.

CHIME observatory which is located in British Columbia's Okanagan Valley has 100-metre-long, semi-cylindrical antennas that can scan the entire northern sky each day. Experts believe there could be upto a thousand FRB in the sky every day. Shriharsh Tendulkar of McGill University, Canada said, "We have discovered a second repeater and its properties are very similar to the first repeater. This tells us more about the properties of repeaters as a population."

(The above story first appeared on LatestLY on Jan 10, 2019 10:46 AM IST. For more news and updates on politics, world, sports, entertainment and lifestyle, log on to our website latestly.com).