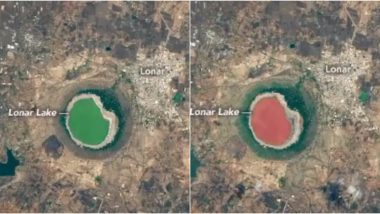 A lake which had changed its colour to pink in Maharashtra had earlier grabbed headlines. Lonar lake which was formed after a meteorite hit the Earth some 5,000 years ago had changed into pink. Experts had then said the colour was due to the salinity and presence of algae in the water. Residents were surprised when it changed colours from green to pink. NASA Earth Observatory had captured images of the nearly 50,000-year-old lake on May 25 and then again on June 10. While scientists are not sure about the crater lake colour changing behaviours, they have some theories. Lonar Crater Lake Water Turns Red, Unusual Colour Leaves Forest Officials Puzzled in Maharashtra's Buldhana District, View Pics.

The lake is located around 500 km from Mumbai in Buldhana district. The lake has made it a popular tourist hub and also attracts scientists from all over the world. For decades, the lake was a deep bluish-green colour and water in the lake is highly alkaline and salty. Lonar Lake Water Turns Pink, NEERI to Visit Maharashtra's Buldhana District to Analyse the Reason.

NASA says of the crater, "India’s Lonar Crater began causing confusion soon after it was identified in 1823 by a British officer named C.J.E. Alexander. Lonar Crater sits inside the Deccan Plateau—a massive plain of volcanic basalt rock leftover from eruptions some 65 million years ago. Its location in this basalt field suggested to some geologists that it was a volcanic crater. Today, however, Lonar Crater is understood to result from a meteorite impact that occurred between 35,000 and 50,000 years ago."

Lonar Lake in Maharashtra Change in Colour Captured by NASA:

#Lonar Lake in Maharashtra, was created by an asteroid in Pleistocene Epoch. It is one of the four known, hyper-velocity, impact craters in basaltic rock anywhere on Earth. Something strange happened within few days here. The water turned into pink. Captured by Landsat 8 of @NASA pic.twitter.com/v9wHj1EYPV

James Andrews of AccuWeather explains, "My hunch is that this lake has periodic pink algal blooms, maybe not unlike alkali lakes in East Africa and even ‘red tides’ in the sea. Another possibility – even more speculative as I am not a chemist by trade – is the formation of finely suspended iron oxide, or hydroxide, particles as a result of some kind of chemical or pH change."

In a video posted on Maharashtra Tourism's Twitter, geologist Gajanan Kharat said the lake has changed colours before, but the recent change was particularly different. Kharat said, "Salinity in the lake has increased as the water level has gone down drastically this year and it has become warmer too resulting in overgrowth of algae. This alga turns reddish in warmer temperatures and hence the lake turned pink overnight." Lonar Crater Lake in Maharashtra's Buldhana Mysteriously Turns Pink, Experts And Locals Surprised by Strange Phenomenon (View Pics)

Recently, when it changed, officials from the state forest department collected water samples to know the exact cause of the colour change. Meanwhile, Bombay high court also ordered that environmental experts submit a report on the findings from the lake's surface and water samples from a nearby dam.

However, some speculate that the change in hue may be related to the lockdown which was imposed in India due to COVID-19 pandemic. But, Madan Suryavashi, head of the geography department at Maharashtra's Babasaheb Ambedkar University, told AFP that is not possible. Australia's Lake Hillier is also pink in colour owing to Halobacteriaceae, a pink-coloured microorganism which works in water with high salinity. But NASA says that the pink colour does not change frequently.

(The above story first appeared on LatestLY on Jun 24, 2020 03:29 PM IST. For more news and updates on politics, world, sports, entertainment and lifestyle, log on to our website latestly.com).