The first astronauts -- Doug Hurley and Bob Behnken-- to ride a SpaceX capsule returned to Earth on Sunday for the first splashdown in 45 years. SpaceX's Crew Dragon spacecraft splashed into the Gulf of Mexico. SpaceX was the first commercially built and operated spacecraft to carry people to and from orbit. 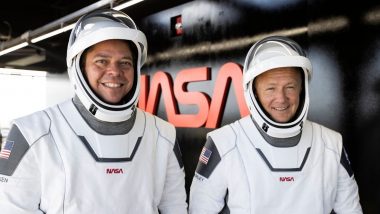 Cape Canaveral, August 2: Two NASA astronauts -- Doug Hurley and Bob Behnken-- returned to Earth  on Sunday. It was the first splashdown in 45 years. SpaceX's Crew Dragon spacecraft splashed into the Gulf of Mexico. SpaceX was the first commercially built and operated spacecraft to carry people to and from orbit. Hurley's and Behnken's capsule touched the water shortly after 14.45 EDT.  They stayed  on the space station for almost two months.

The sight of the vehicle's four main parachutes floating down over the Gulf of Mexico was confirmation the spacecraft had survived its fiery descent through the atmosphere. Recovery vessels lifted the Crew Dragon capsule out of the sea onto a recovery ship. The men will be checked over by medical staff before being flown to shore by helicopter.

Video of Doug Hurley And Bob Behnken returning to The Earth:

Hurley and Behnken rode the SpaceX Dragon capsule back to Earth less than a day. The spacecraft departed from International Space Station on Saturday. Their mission served as an end-to-end demonstration of the astronaut "taxi service" the company, owned by tech entrepreneur Elon Musk, will be selling to NASA from now on. NASA SpaceX Demo 2 Mission: Rocket Lifts Off on Historic Private Flight With Two Astronauts Douglas Hurley And Robert Behnken.

SpaceX was launched on May 30 from Florida's Kennedy Space Center. It was the first time a private company launched people into orbit and also the first launch of NASA astronauts from home turf in nearly a decade.  NASA has decided not to create replacement of its shuttle, but turned to SpaceX and also Boeing to ferry astronauts to and from the space station.

Until SpaceX rocketed into orbit, NASA astronauts relied on Russian rockets. The Boeing corporation is also developing a crew capsule solution but has had to delay its introduction after encountering software problems on its Starliner capsule.

(The above story first appeared on LatestLY on Aug 03, 2020 01:12 AM IST. For more news and updates on politics, world, sports, entertainment and lifestyle, log on to our website latestly.com).