PSLV-C49 Rocket, Carrying EOS-01 Satellite, Successfully Launched by ISRO From Sriharikota; All You Need to Know 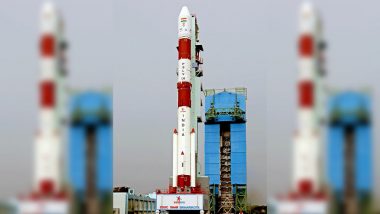 Sriharikota, November 7: The Indian Space Research Organisation or ISRO on Saturday successfully launched the Indian rocket Polar Satellite Launch Vehicle-C49 (PSLV-C49) from Satish Dhawan Space Centre (SDSC) SHAR in Sriharikota. PSLV-C49 was carrying radar imaging satellite EOS-01, the primary passenger, and nine other foreign satellites, including four of the United States. The 26-hour countdown of the launch began at 1:02 pm on Friday. All 10 satellites were successfully placed into the desired orbit. ISRO Will Not Be Privatised, Says Space Organisation's Chief K Sivan.

The launch of PSL-C49, DL variant of PSLV rocket, was the first space mission for ISRO from India in 2020. The payload includes nine foreign satellites that are from Lithuania (1-R2, technology demonstrator), Luxembourg (4 maritime application satellites by Kleos Space) and the US (4-Lemur multi-mission remote sensing satellites). With these, ISRO has slung a total of 328 foreign satellites, all for a fee. ISRO and IISc Bengaluru Develop Sustainable Process to Make Space Bricks For Moon.

PSLV-C49 is the PSLV rocket's DL variant that has two strap-on booster motors. This rocket variant was used the first time to put the Microsat R satellite into orbit on January 24, 2019. The PSLV is a four-stage engine rocket powered by solid and liquid fuels alternatively with six booster motors strapped on to the first stage to give higher thrust during the initial flight moments.

According to ISRO, EOS-01 is an earth observation satellite intended for applications in agriculture, forestry and disaster management support. The satellite can take pictures day and night and will be useful for surveillance as well as civilian activities. Nine foreign satellites were launched under a commercial agreement with NewSpace India Limited (NSIL), Department of Space.

(The above story first appeared on LatestLY on Nov 07, 2020 03:15 PM IST. For more news and updates on politics, world, sports, entertainment and lifestyle, log on to our website latestly.com).