"If Mimas has an ocean, it represents a new class of small, 'stealth' ocean worlds with surfaces that do not betray the ocean's existence," said SwRI's Dr Alyssa Rhoden, a specialist in the geophysics of icy satellites, particularly those containing oceans. 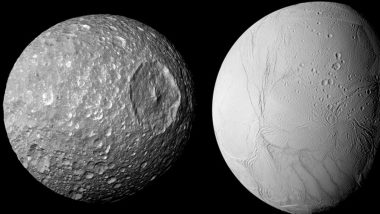 New Delhi, January 21: Scientists have discovered an underground ocean buried beneath the surface of the Death Star-like moon of Saturn, paving the way for a new class of "stealth" ocean worlds with possible signs of life.

The team at Southwest Research Institute (SwRI) in the US set out to prove that the tiny, innermost moon of Saturn -- Mimas -- was a frozen inert satellite and instead discovered compelling evidence that Mimas has a liquid internal ocean.

In the waning days of NASA's Cassini mission, the spacecraft identified a curious libration, or oscillation, in the moon's rotation, which often points to a geologically active body able to support an internal ocean. Life on Mars? NASA’s Curiosity Rover Finds Carbon Signature on Mars.

"If Mimas has an ocean, it represents a new class of small, 'stealth' ocean worlds with surfaces that do not betray the ocean's existence," said SwRI's Dr Alyssa Rhoden, a specialist in the geophysics of icy satellites, particularly those containing oceans.

One of the most profound discoveries in planetary science over the past 25 years is that worlds with oceans beneath layers of rock and ice are common in the solar system. Such worlds include the icy satellites of the giant planets, such as Europa, Titan and Enceladus, as well as distant planets like Pluto.

"Because the surface of Mimas is heavily cratered, we thought it was just a frozen block of ice," Rhoden said. "It turns out that 'Mimas' surface was tricking us, and our new understanding has greatly expanded the definition of a potentially habitable world in our solar system and beyond."

The team also found that the heat flow from the surface was very sensitive to the thickness of the ice shell, something a spacecraft could verify. For instance, the Juno spacecraft is scheduled to fly by Europa and use its microwave radiometer to measure heat flows in this Jovian moon.

This data will allow scientists to understand how heat flow affects the icy shells of ocean worlds such as Mimas, which are particularly interesting as NASA's Europa Clipper approaches its 2024 launch. Jupiter-Like Planet Named TOI-2180 b Spotted by NASA Citizen Scientist.

The discovery would "help us better understand Saturn's rings and mid-sized moons as well as the prevalence of potentially habitable ocean moons, particularly at Uranus. Mimas is a compelling target for continued investigation," said Rhoden, is co-leader of NASA's Network for Ocean Worlds Research Coordination Network.

(The above story first appeared on LatestLY on Jan 21, 2022 05:04 PM IST. For more news and updates on politics, world, sports, entertainment and lifestyle, log on to our website latestly.com).