Solar Eclipse April 30, 2022 Live Streaming Online: When, Where And How To Watch the Live Telecast of the Astronomical Event

Eclipses happen anywhere between four to six times per year, and they arrive in back-to-back pairs. This year, the first Surya Grahan or Solar Eclipse will occur on Saturday, 30th April. The special thing is that astronomers have also called this partial solar eclipse as Black Moon. 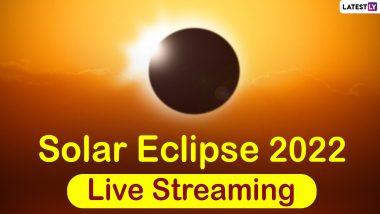 The world is going to witness the very first solar eclipse on the 30th of April, 2022. According to the National Aeronautics and Space Administration (NASA), during the partial solar eclipse 64 per cent of the sun's disk will be blocked by the Moon as observed from Earth. Eclipses happen anywhere between four to six times per year, and they arrive in back-to-back pairs. Solar Eclipse or Surya Grahan in Hindi happen when the moon aligns exactly between the Earth and the sun, blocking the light going from the sun to Earth. The phenomenon of the partial eclipse which will occur on 30 April is called colliding with another celestial activity known as Black Moon. When Is Solar Eclipse 2022 in April? Know the Date, Time and Visibility of Year's First Surya Grahan in India and Other Places Around The World.

When, Where And How To Watch The First Partial Solar Eclipse Of 2022

For your information 'Black Moon' is a very rare occurrence and the sphere will witness it after 2021. According to Space.com, there is no single definition of a black moon as the word is mainly used to refer to any event associated with the new moon phase. Unfortunately, the partial solar eclipse will not be visible in India. The Surya Grahan will occur during midnight and as per MP Birla Planetarium, Kolkata, the partial eclipse will begin at 12:15 am and end at 4:07 am IST. Argentine, Chile, most of Uruguay, southwestern Bolivia, western Paraguay, southeastern Peru, and a small area of southwestern Brazil can watch the first partial solar eclipse of this year. Solar Eclipse 2022 Dos and Don’ts: Important Guidelines & Rules One Should Strictly Follow During Surya Grahan To Prevent Its Inauspicious & Harmful Effects.

One of the most obvious yet crucial parts of exploring the eclipse is one can not see the Grahan with naked eyes. Skygazers and Astrophile can watch the solar eclipse via live streaming on India-based YouTube channels. If not this option, then like every year, reportedly this time also NASA will run a live broadcast of Partial Solar Eclipse 2022 on Saturday through their social media channels. The solar eclipse webcast is expected to run the length of the April 30 solar eclipse, from start to finish.

(The above story first appeared on LatestLY on Apr 28, 2022 04:40 PM IST. For more news and updates on politics, world, sports, entertainment and lifestyle, log on to our website latestly.com).