Space Hurricane Spotted for the First Time Whirling Over North Pole, How Is It Different From the Hurricanes on Earth? All You Need to Know

An international team of scientists have discovered the space plasma hurricanes, for the first time, whirling over the North Pole on Earth’s outer surface. What is a space hurricane? How is it different from Earth’s cyclones and hurricanes? In this article, we bring you everything you need to know about the recent discovery. 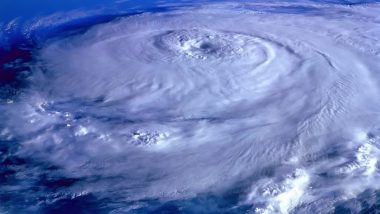 A hurricane is a type of storm called a tropical cyclone, which mostly forms over tropical or subtropical waters. They are often the most destructive forces of nature, slamming our coasts repeatedly, year after year. But can you even imagine these forces existing in outer space? Until now, scientists were certain that space plasma hurricanes exist, but finally, they could prove it with a breathtaking discovery. An international team of scientists have discovered the space plasma hurricanes, for the first time, whirling over the North Pole on Earth’s outer surface. It lasted for about eight hours, swirling counterclockwise. So, what is a space hurricane? How is it different from Earth’s cyclones and hurricanes? In this article, we bring you everything you need to know about the recent discovery.

What Is A Space Hurricane?

A space hurricane is a solar windstorm and is exponentially larger and more powerful than conventional hurricanes on Earth. They are related to the aurora borealis phenomenon, as the electron precipitation from the storm produces gigantic, cyclone-shaped auroras. According to scientists, they occur in the polar regions of the planets with magnetic fields. Space hurricanes are made up of plasmas, consisting of extremely hot ionised gases that rotate at high speeds. Total Solar Eclipse and Hurricane in Pacific Ocean Captured in a Satellite Image is Beautiful Reminder of the Wonders of This Planet.

On August 20, 2014, a research team from Shandong University recorded a gigantic flowing swirl of plasma for hours before dissolving over the North Pole. However, it was uncovered only recently during research led by scientists. The space hurricane “rained” electrons instead of water, and it had multiple spiral arms and lasted for eight hours before gradually fizzing. The study further added that the space hurricane ranged from 110 to 860 km in altitude and consisted of plasma. The hurricane's centre was almost still, mirroring the hurricanes we see on Earth and other planetary bodies. The space hurricanes showering electrons interacted with Earth’s ionosphere, leading to one of the most extraordinary cosmic views—a huge cyclone-shaped aurora over the North Pole region. What Causes a Fire Whirl or Fire Devil?

How Is It Different From Earth’s Hurricanes?

Just as mentioned above, unlike other hurricanes, a space hurricane rains electrons into the ionosphere, causing a cyclone-shaped glowing green aurora below. Hurricanes on Earth are formed within the atmosphere by thunderstorms and angular momentum from the planet’s rotation, but space hurricanes are formed by plasma interacting with magnetic fields. Massive African Sahara Dust Clouds Visible Even From Space.

In space, astronomers have spotted hurricanes on Mars, Saturn and Jupiter, which appeared similar to terrestrial hurricanes in the lower atmosphere. But this was the first time scientists spotted a hurricane in the upper atmosphere of any planet in our solar system.

(The above story first appeared on LatestLY on Mar 04, 2021 07:30 PM IST. For more news and updates on politics, world, sports, entertainment and lifestyle, log on to our website latestly.com).