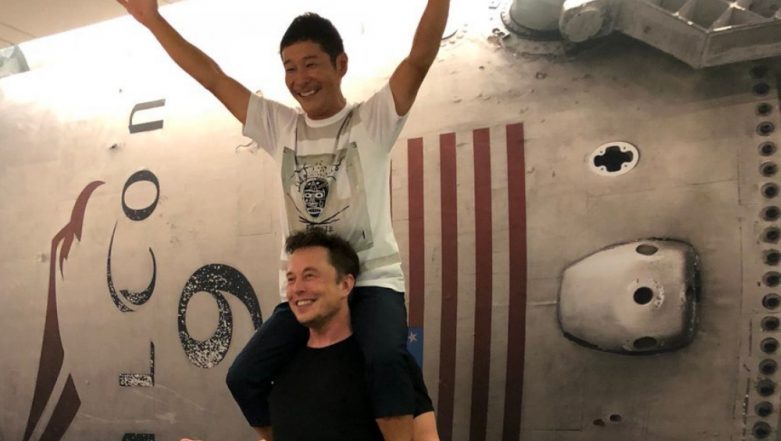 SpaceX CEO Elon Musk announced on Monday night that Japanese billionaire Yusaku Maezawa would be the first private person to fly solo around the moon on the company's future rocket, the Big Falcon Rocket (BFR). Mawzawa is also the founder of Zozotown, Japan's largest online clothing retailer, and he plans to fly as early as 2023. Before the announcement took place, Musk on Twitter showed off two images of the BFR. Elon Musk Trolled on Twitter For Calling British Diver Who Helped in Thai Cave Boys Rescue a 'Pedo Guy'.

According to a report on the Verge, Maezawa plans to take artists with him and his intention is to turn the ride into an art project called #dearMoon. The best is the trip will be free for the artists who will be accompanying him. As quoted in the report he said, "I would like to invite six to eight artists from around the world to join me on this mission to the Moon. These artists will be asked to create something after they return to Earth, and these masterpieces will inspire the dreamer within all of us.” Yusaku Maezawa, the First Private Passenger to the Moon on Elon Musk’s BFR: Know All About the Japanese Billionaire.

Maezawa, who is 42, reportedly has a current net worth of $2.9 billion, according to Forbes. As per a report on FoxNews, the BFR is SpaceX's upcoming two-stage reusable spaceship system which is going to weigh 9.7 million pounds and is capable of taking a 330,000-pound payload to Mars and lower-Earth orbit (LEO), officials say. As announced in September 2017, the BFR will eventually replace SpaceX's other launch vehicles, the Falcon 9 and Falcon Heavy, as well as its Dragon spacecraft.