Sony PS5 will be introduced as a successor to the PS4, which has been the company's second best-selling console yet. 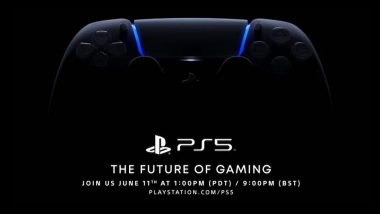 Sony is all geared for the launch of the highly awaited PlayStation 5 console, which will be launched tonight. The company will be officially announcing the prices of the PS5 gaming console at its launch event titled - 'The Future of Gaming'. The launch event of PlayStation 5 is slated to take place tonight at 8 pm UTC which is around 01.30 am IST. The interested fans can watch the event live on its official Sony PlayStation website. The launch event was originally scheduled for June 4, however, it got delayed due to the countrywide protest against the killing of George Floyd. Sony PS5 Launch Event Reshceduled for June 11.

The company will be telecasting the PS5 event tonight. Given the current situation, the company had no other option to host a digital event. Sony has asked the players to watch the live stream event on PlayStation’s official channels on Twitch and YouTube. The company is also expected to get live updates on Twitter as well as Facebook. The company has already confirmed that the launch event is a pre taped program which will be streamed online at 1080p and 30fps. Moreover, the company has recommended interested fans to watch the event with headphones. The company has already revealed the details of the PlayStation 5 hardware along with its capabilities and the controller. However, the launch event is expected to focus more on the software.

See you at 1:00pm Pacific time for a look at the future of gaming on #PS5: https://t.co/ncV6uVhMp9 pic.twitter.com/jvHMS76MBJ

If the rumours are to be believed, Sony will be giving out new information about the console, which will be followed by the unveiling itself. However, the company will not be revealing the prices of the console yet. On the contrary, the gaming console was listed on Amazon UK with a price tag of £599.99 ($760/€670). The company could reveal some of the games, which might include Horizon: Zero Dawn sequel, new Ratchet & Clank, Resident Evil 8, new Silent Hill game, Gran Turismo 7, and others. Notably, the upcoming PS5 gaming console is undoubtedly Sony’s most ambitious product to date. It will be introduced as a successor to the PS4, which has been the company's second best-selling console yet. The PlayStation 5 will be pitted against Microsoft’s Xbox Series X.

(The above story first appeared on LatestLY on Jun 11, 2020 10:26 PM IST. For more news and updates on politics, world, sports, entertainment and lifestyle, log on to our website latestly.com).