Sony Interactive Entertainment has announced that its newest generation game console, PlayStation5 (PS5), has sold through more than 10 million units globally since its launch. 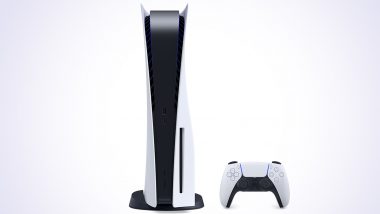 San Francisco: Sony Interactive Entertainment has announced that its newest generation game console, PlayStation5 (PS5), has sold through more than 10 million units globally since its launch. The company on Wednesday said that PS5 is the fastest-selling console in the company's history and continues to outpace sales of its predecessor, PlayStation 4 (PS4). New Sony PS5 Ready Smart TVs With Up to 8K Resolution Announced, Check Prices & Features.

"While PS5 has reached more households faster than any of our previous consoles, we still have a lot of work ahead of us as demand for PS5 continues to outstrip supply," Jim Ryan, president and CEO of Sony Interactive Entertainment.

"I want gamers to know that while we continue to face unique challenges throughout the world that affect our industry and many others, improving inventory levels remains a top priority for SIE," Ryan added.

In April, the company said that it had managed to sell 7.8 million PlayStation 5 consoles till March 31 this year. In its earnings report, the company had revealed that PlayStation Plus has 47.7 million subscribers globally, a 14.7 per cent increase (year on year). According to multiple media reports, the stock of Sony PlayStation 5 will continue to be very limited until the second half of 2021 due to chip shortage. Sony has been struggling to maintain the supply of the PS5 consoles.

(The above story first appeared on LatestLY on Jul 29, 2021 05:31 PM IST. For more news and updates on politics, world, sports, entertainment and lifestyle, log on to our website latestly.com).