Swedish music streaming giant Spotify has announced that it isArolling out the ability to download favourite playlists, albums and podcasts on Apple Watch. 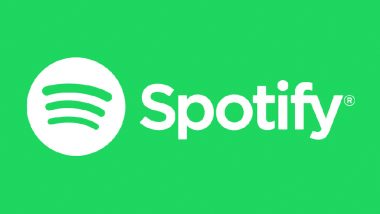 New Delhi, May 22: Swedish music streaming giant Spotify has announced that it is rolling out the ability to download favourite playlists, albums and podcasts on Apple Watch. All users are already able to play tracks, albums, playlists and podcasts and now Premium users will also be able to download everything they're listening to for a true offline and phone-free experience, the company said in a statement. Spotify Rolling Out New Search Filters for iOS & Android Platforms: Report.

With the new feature, users can control playback -- seamlessly playing, pausing and skipping tracks or podcast episodes -- directly from their wrist. They can also use your Apple Watch to control playback from everything, whether it's wireless speakers, TVs or gaming consoles, using Spotify Connect.

The new overall experience for Spotify on Apple Watch is rolling out to all users globally over the coming weeks. Users can either update their watches to the latest version or download the app on the App Store.

(The above story first appeared on LatestLY on May 24, 2021 05:52 PM IST. For more news and updates on politics, world, sports, entertainment and lifestyle, log on to our website latestly.com).