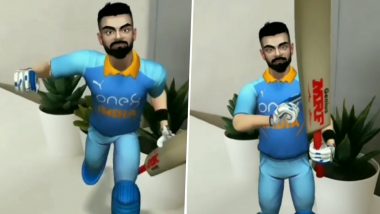 There is a new filter on Instagram and Facebook, the augmented reality (AR). This latest filter has already created a hype among users, and now cricket fans have more one reason for twice the joy. As the biggest cricketing nations, India and Australia are set to enthral fans across the globe, the Facebook-owned app has launched a 3D AR effect featuring, Team India cricket captain, Virat Kohli. The AR filter is introduced to remember one of Kohli’s remarkable performances in his cricketing career. Titled 'Bat Talks for India,' the AR effect will allow fans to recreate the Indian cricket team skipper’s iconic celebration when he recorded a century against Australia, nearly two years ago.

Virat Kohli and Anushka Sharma are expecting a baby and currently, the cricketer has announced to be on a paternity leave. The AR effect will allow fans to superimpose the filter on their photos and videos and share it on both Facebook and Instagram to celebrate his awesome performance against Australia about two years ago. Isn’t it exciting? Well for cricket and Kohli’s fans, the latest filter is a remarkable one to celebrate his cricketing career. On Instagram, the effect is available in Kohli’s profile within the effects tab. How to use the AR effect? You can access the AR filter within the Instagram camera effect tray by opening the camera, tapping the effect icon and swiping right until you find the desired effect—which is Virat Kohli’s 3D AR effect.

“Guys, it's finally here. Visit my Instagram profile and scroll over to the filters tab to try out my new AR filter. Shoot something creative and use #BatTalk in your videos for a repost. Let's get creative!” reads Kohli’s Insta caption as he shared the effect with his followers.

According to reports, Facebook has teamed up with Sportsmanias, an industry leader in creating sports emojis and AR effects to develop 3D AR filter. Through the latest effect, cricket fans will be able to display their support for team India and Kohli by sharing it on their Instagram and Facebook stories. Meanwhile, India is scheduled to play four Tests, three One Day Internationals (ODIs) and three Twenty20 International (T20I) matches in Australia with the first ODI match of the series starting November 27, 2020.

(The above story first appeared on LatestLY on Nov 25, 2020 01:58 PM IST. For more news and updates on politics, world, sports, entertainment and lifestyle, log on to our website latestly.com).