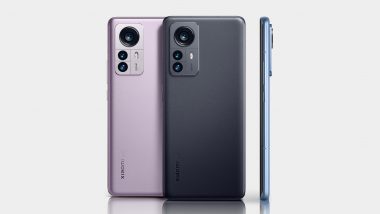 Last week, Xiaomi had confirmed that the Xiaomi 12 Pro 5G smartphone is coming soon to India. The company also released a video teaser on its official Twitter account. Though the teaser does not reveal the launch date, reports have claimed that the launch will take place this month. Ahead of its launch, the price of Xiaomi 12 Pro 5G has been tipped by tipster Yogesh Brar. Xiaomi 12 Pro 5G Teased Online, India Launch Soon.

Life is a show, let's make it worth the wait.#𝑋𝑖𝑎𝑜𝑚𝑖12𝑃𝑟𝑜 5𝐺 is coming soon to India!

The latter is said to be powered by Dimensity 9000 chipset, whereas the former could get a Dimensity 8100 SoC.

Xiaomi 12 Pro 5G has been also been reportedly spotted on the Amazon India website, which hints that the smartphone will be sold via the e-commerce platform. In terms of specifications, the handset might come with a 6.73-inch WQHD+ 120Hz AMOLED display, a Snapdragon 8 Gen 1 SoC, a 50MP triple rear camera module and a 4,600mAh battery.

(The above story first appeared on LatestLY on Apr 07, 2022 04:21 PM IST. For more news and updates on politics, world, sports, entertainment and lifestyle, log on to our website latestly.com).