On her death, the international community of scholars, researchers and journalists have expressed shock and angst against a voice of progress and women's liberation in the war-torn Afghanistan. 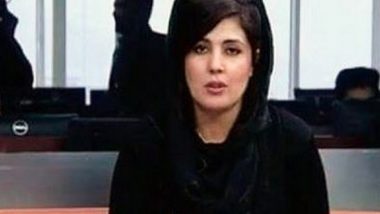 Kabul, May 12: The murder of Afghanistan's renowned female journalist Mina Mangal has evoked a sharp reaction from across the world. The former scribe, who was now working as the adviser on cultural affairs to the Afghan Parliament, was shot dead in broad daylight in eastern Kabul. A couple of days before her assassination, the deceased had penned a social media post alleging threat to her life.

On her death, the international community of scholars, researchers and journalists have expressed shock and angst against a voice of progress and women's liberation in the war-torn Afghanistan.

Here Are Some of The Reactions:

Mina Mangal, a former #journalist and an adviser to the parliament was killed in an attack by unknown armed men in #Kabul on Saturday, said Nusrat Rahimi a spokesman for the Ministry of Interior Affairs. pic.twitter.com/AZ6PxbsMaE

A former prominent Afghan TV journalist has been shot dead in Kabul. Mena Mangal had worked for more than a decade as a presenter for Tolo TV. She also ran popular social-media pages that discussed the rights of Afghan women. https://t.co/NCxgQvlctL

'Mangal Had Alleged Threat to Life'

On May 3rd she wrote a post on her personal social media page about the threat to her life. This is an absolute dishonor to @NDSAfghanistan @moiafghanistan @onscafghan pic.twitter.com/kFyMoTejCj

She was former prominent @TOLOnews TV presenter who ran very popular social-media pages that discussed rights of Afghan girls to go to school and women to work.https://t.co/kl0O84sTyY pic.twitter.com/ETrKRo6BKc

The killing of #women who speak up in order to silence them is the final evidence of utter #patriarchal bankruptcy; it happened again in #Afghanistan today, as the so-called ‘protectors’ and ‘liberators’ of women do their deals. #MenaMangal

Condolence From Top US Scribe:

Press Freedom Being Muzzled in Afghanistan

Journalists attacked in #Afghanistan since March 2019:

Ahmad Ahmadi wounded by explosive attached to his car in Helmand. #PressFreedom https://t.co/zSh5dwiXTM

Absolutely devastated to learn that #MenaMangal, a prominent journalist and political adviser in #Afghanistan, has been gunned down in #Kabul, just days after she warned on social media that she feared for her life.https://t.co/5aZ8FHoVIm

Mangal's killing the reflects the state of lawlessness and threat to women in public life in Afghanistan. The country's miniscule section of progressive females fear the rise of an ruthless patriarchy, if the Taliban is legitimised following the exit of the United States.

Taliban, which sprung to power in Afghanistan post the Cold War, was known for implementing laws which suppressed the presence of women in public life. Despite advances since the Taliban's ouster in 2001, women in Afghanistan are still frequently marginalized. Their plight is expected to accelerate if the US-Taliban peace deal sails through, giving the extremist group a legit political space in the conflict-ridden nation.

(The above story first appeared on LatestLY on May 12, 2019 11:52 AM IST. For more news and updates on politics, world, sports, entertainment and lifestyle, log on to our website latestly.com).