After India’s Demand for Kohinoor, Now Ethiopia Wants Its Maqdala Treasures Looted By The British, Returned 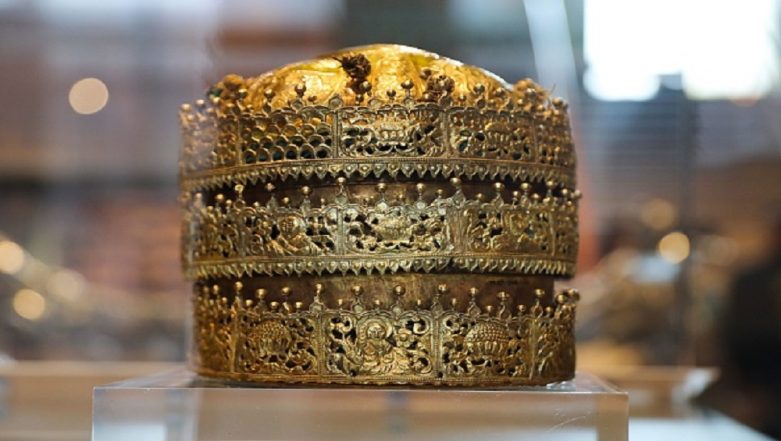 A Crown, made in Ethiopia around 1740, made of gold and gilded copper at an exhibition at the Victoria and Albert museum in London, on April 5, 2018. (Photo: DANIEL LEAL-OLIVAS/AFP/Getty Images)

The Victoria and Albert Museum in London is hosting an exhibit of treasures from Ethiopia but there is a hitch – the gold artefacts were part of a loot carried out 150 years ago. The items, which include a gold crown, a gold chalice and a royal wedding dress, were stolen after the capture of Meqdela - the mountain capital of the then Ethiopian ruler, Emperor Tewodross II, in 1868.

In 2007, Addis Ababa launched a formal restitution claim to have the treasures returned back to Ethiopia.

This year as the exhibit goes on display, Ethiopia is renewing pressure for the return of its heritage artefacts. "Showing the looted Meqdela artifacts to the public is positive. We hope it is going to create pressure on them [the Museum] that will help us in our efforts to return the artifacts to where they belong," Desalegn Abebaw, the director of country's Cultural Heritage Inventory, Grading and Inspection, told Al Jazeera.

The V&A museum has offered to give the items to Ethiopia on a long-term loan. “The speediest way, if Ethiopia wanted to have these items on display, is a long-term loan … that would be the easiest way to manage it,” said Tristam Hunt, the director of the Victoria and Albert Museum in London. However, Hunt stresses that this solution wouldn't be a "blanket policy" covering all of the museum's colonial treasures.

The museum director’s words are obviously to protect the items that UK’s museums are full off – rare and prized artefacts from the Crown’s former colonies. Understandably, Ethiopia is not the only country requesting the UK to consider giving up the treasures adorning its museums. The Greek government has launched a long campaign to return the Parthenon marbles to Greece and even recruited Amal Clooney to fight its case.

The sheer number of treasures looted from India is so many, the head of the Archaeological Survey of India (ASI), the state body in-charge of India's heritage assets, told The Independent newspaper that the list of his country's treasures held abroad was "too long to handle" and there was a need for a "diplomatic and legal campaign" for their restitution from institutions including the British Museum, the Royal Collection and the Birmingham Museum and Art Gallery.

Among the items on India's list are the famed “Birmingham Buddha” at about 1500 years old taken from Sultanganj; Amravati railings, a series of limestone carvings dating from around AD100, acquired from a Buddhist temple in Andhra Pradesh by Victorian explorers; the Saraswati idol, a sculpture of the Hindu deity of knowledge from the Bhoj temple and last but not the least, the Kohinoor diamond, which sits in the heart of a crown made for the Queen Mother as the last empress of India.

The increasing number of requests for restitution shows the time of cultural appropriation is over and it would behoove the British government to take a proactive stance when it comes to the repatriation of prized artefacts.