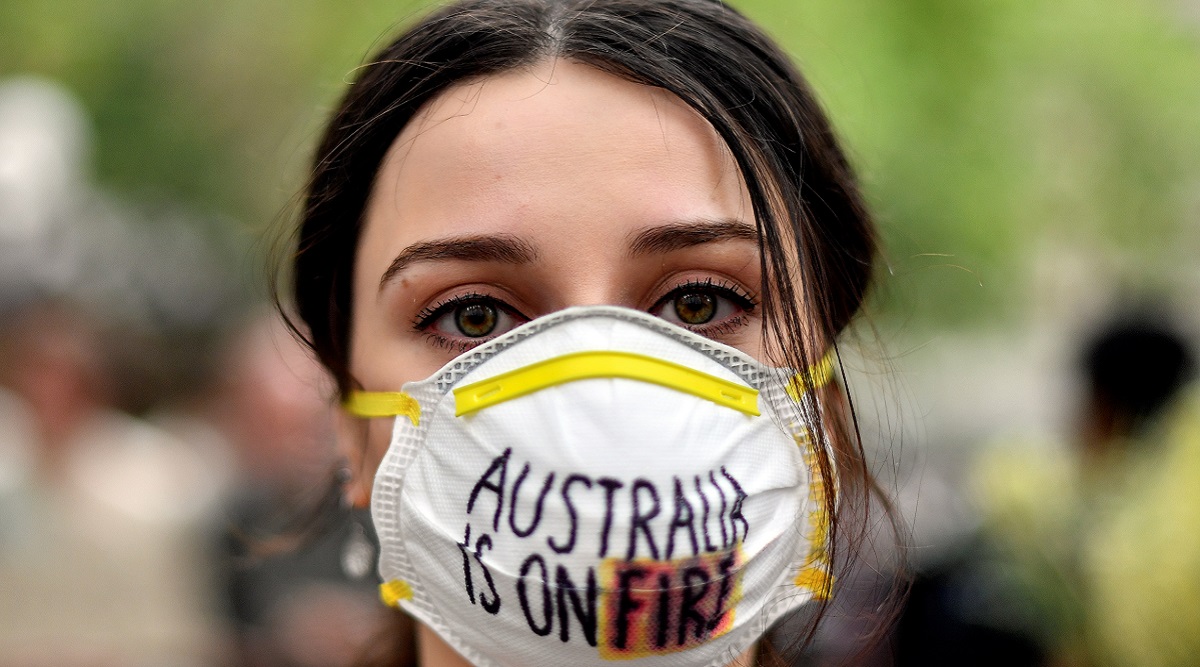 A demonstrator with a mask attends a climate protest rally in Sydney. (Photo Credits: AFP)

Sydney, December 11: Up to 20,000 protesters rallied in Sydney on Wednesday demanding urgent climate action from Australia's government, as bushfire smoke choking the city caused health problems to spike. Sydney has endured weeks bathed in toxic smoke as hundreds of blazes have raged across the countryside, with hospitals recording a 25 percent increase in the number of people visiting emergency departments last week. On Tuesday smoke alarms rang out across Australia's biggest city, with thick haze triggering smoke alarms and forcing buildings to be evacuated, school children to be kept indoors, and ferries to be cancelled.

The devastating fires have focused attention on climate change, with scientists saying the blazes have come earlier and with more intensity than usual due to global warming and a prolonged drought. Police estimated the crowd size at 15,000, organisers put the figure at 20,000. Many of the protestors voiced anger at the government's silence in the face of the crisis. ‘Sydney Smog Was So Bad That It Reminded Me of India’, Says Usman Khawaja.

"The country is on fire" said 26-year-old Samuel Wilkie attending his first climate protest. He described politicians' response as "pathetic". "Our government is not doing anything about it," said 29-year-old landscape gardener Zara Zoe. "No one is listening, no one is doing anything." Prime Minister Scott Morrison -- a staunch backer of Australia's vast coal industry -- has said little about the smoke since the crisis began, preferring to focus on fire-hit rural communities.

Organiser Chloe Rafferty said that had created anger at the conservative government's inaction. "I think the wider public can see that we are not expecting the climate crisis in the future but we are facing the climate crisis now," she told AFP. "People are experiencing it in their day-to-day lives."

As well as a rise in people visiting hospitals with smoke-related health symptoms, the number of emergency calls for ambulances spiked 30 percent last week. "For most people, smoke causes mild symptoms like sore eyes, nose and throat," top health department official Richard Broome said. "However, people with conditions like asthma, emphysema and angina are at greater risk because the smoke can trigger their symptoms."

Smoke from bushfires is one of the biggest contributors to air pollution in Australia, releasing fine particles that can lodge deep within people's lungs and cause "severe" health impacts over time, according to scientist Mick Meyer from government-funded scientific research agency CSIRO. "The impact of smoke on people remote from the fires may, on occasion, substantially exceed the direct injury to people within the fire zone," he wrote in The Conversation.

"But we currently lack the operational tools to understand the extent of these impacts or to manage them." Six people have been killed and more than 700 houses destroyed in bushfires this fire season.

Though the human toll has been far lower than the deadliest fire season in 2009 -- when almost 200 people died -- the scale of this year's devastation has been widely described as unprecedented. Three million hectares (7.4 million acres) of land has been burnt -- the size of some small countries -- and vast swathes of koala habitat scorched. Official data shows 2019 is on track to be one of the hottest and driest years on record in Australia.