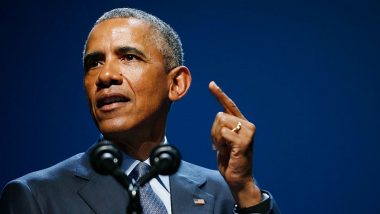 Washington, August 4: Former United States President Barack Obama, who was also the first-ever head of state from African-American descent, was born on this date in the year 1961. Even four years after demitting Office, Obama continues to remain one of the most revered personalities among the coloured and other marginalised groups in the US. On his 59th birthday, here are five interesting facts to know about Obama.

Obama's tenure as the US President ended in 2016. As the country's constitution bars a person to remain in power for more than two terms, he could not put his hat in the ring for a third term. In the elections that followed, the Democratic Party was defeated and Republican Party's Donald Trump emerged as the next President.

(The above story first appeared on LatestLY on Aug 04, 2020 07:59 AM IST. For more news and updates on politics, world, sports, entertainment and lifestyle, log on to our website latestly.com).