William Amos was caught on camera urinating while attending attending House of Commons proceedings virtually. The incident took place on May 26. 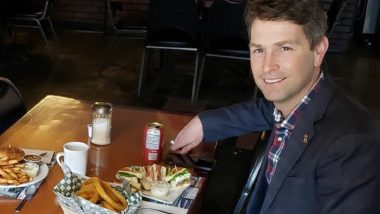 Ottawa, May 29: Canadian lawmaker William Amos, who was recently caught stark naked in a virtual meeting of the House of Commons, committed another blunder during virtual parliamentary proceedings. William Amos was caught on camera urinating while attending attending House of Commons proceedings virtually. The incident took place on May 26. Canada's Ruling Liberal Party Expels Indo-Canadian Lawmaker from Its Caucus.

After he was caught on camera urinating during the virtual meeting, Amos issued an apology and announced that he is stepping down temporarily as Parliamentary Secretary and from committee duties to "seek assistance". "Last night, while attending House of Commons proceedings virtually, in a non-public setting, I urinated without realising I was on camera," the Canadian parliamentarian said in an apology posted to Twitter. Advocate Appears in ‘Baniyan’ for Hearing on Video Conference Call, Irks Rajasthan High Court Judge (View Tweet).

Amos is a Member of Parliament (MP) for Pontiac, Quebec, also a member of Prime Minister Justin Trudeau's ruling Liberal Party. "I am deeply embarrassed by my actions and the distress they may have caused anybody who witnessed them. While accidental and not visible to the public, this was unacceptable and I apologise unreservedly," he expressed.

This is second time in few weeks that Amos is facing on-camera embarrassment. On April 14, he appeared completely naked during a parliamentary video call. A screenshot from the call circulated widely online. The viral screenshot showed Amos standing behind a desk between the Quebec and Canadian flags, his private parts hidden by what appears to be a mobile phone in one hand.

Amos had then apologised and said that his video "accidently" turned on while he was changing dress after jogging. He had even assured that he wouldn't repeat such mistake.

(The above story first appeared on LatestLY on May 29, 2021 04:27 PM IST. For more news and updates on politics, world, sports, entertainment and lifestyle, log on to our website latestly.com).