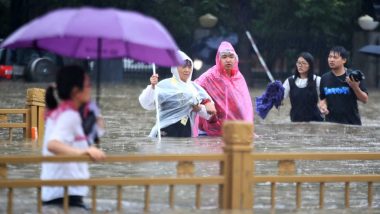 Zhengzhou, July 22: Heavy rains lashed Central China in the past three days. It is reportedly the heaviest rainfall in  China's Henan province in 1,000 years. The death toll in the flash floods caused due to heavy showers in Henan rose to 33 on Thursday. Among the deceased were 12 subway passengers. Eight people were also reported missing in the floods.

The rains have affected about three million people in Henan province, and a total of 376,000 local residents have been relocated to safe places so far. More than 215,200 hectares of crops have also been damaged by the torrential showers. One Dead, Two Missing as China's Henan Province Records Heaviest Rainfall in 60 Years.

Several images and videos showed passengers up to their necks in water inside a train on Zhengzhou’s subway. In the videos doing rounds on social media, passengers could be seen trapped in subway trains clinging on to handlebars desperately waiting for help as floodwaters raised up to their necks. Videos of cars floating in rainwater also surfaced on social media. China Floods: Torrential Rain Affects 3 Million People in Henan Province; 33 Dead, 8 Missing.

Here Are Videos Of Rainwater Entering Subway Train in Zhengzhou:

The videos shared on Chinese social media about the floodings in Henan following the heavy rain really show the severity of the situation. These are some of them. pic.twitter.com/zZMKxvAGAX

Earlier in this thread there was a video of people helping those trapped in lower levels. There is more footage showing other places in Zhengzhou where citizens also joined forces to help those trapped by the water to get out safely. pic.twitter.com/1R9q1JcUtY

Earlier in this thread there was a video of people helping those trapped in lower levels. There is more footage showing other places in Zhengzhou where citizens also joined forces to help those trapped by the water to get out safely. pic.twitter.com/1R9q1JcUtY

Among the deceased were four people who were killed in Gongyi city after houses and walls collapsed. Multiple landslides also occurred due to heavy showers. As per weather authorities in Zhengzhou, capital of Henan province, over 600 mm rainfall in the city since the weekend. Meanwhile, the annual average rainfall of the city is around 640 mm.

The rainfall has created a 20-metre breach in the Yihetan dam in Luoyang. Authorities had warned people that the dam could collapse at any time. The Chinese government has deployed soldiers to carry out emergency responses, including repairing the dam. Thousands of firefighters were also deployed in the region.

Both Henan provincial and Zhengzhou municipal meteorological bureaus have raised the emergency response for meteorological disasters to the level I. The province also reported power failure. Hospitals also ran out of electricity, the Post reported. More than 160 train services were stopped at Zhengzhoudong Railway Station. The airport in Zhengzhou cancelled 260 flights into and out of the city, and local railway authorities also halted or delayed some trains.

(The above story first appeared on LatestLY on Jul 22, 2021 03:22 PM IST. For more news and updates on politics, world, sports, entertainment and lifestyle, log on to our website latestly.com).