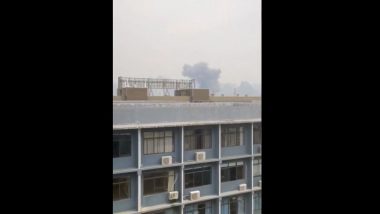 "In response to the Internet spread of "Taiwan shot down a CCP SU-35 aircraft?" Air Force Command solemnly refuted today that this is false information, and completely untrue," Republic of China's Ministry of National Defense said in a statement. Notably, Taiwan is also known as the Republic of China. Taiwan to Redesign Passport After Being 'Fed Up of Being Confused With China' Amid COVID-19 Pandemic.

Taiwan's Air Force Command also pointed out that it strongly condemns such malicious acts by deliberately creating and disseminating false information on the internet in an attempt to confuse the audience. Earlier in the day, reports surfaced that Taiwan's air defence missile shot down Chinese fighter jet Su-35. A video with similar claims also went viral.

Air Force Command pointed out that it strongly condemns such malicious acts by deliberately creating & disseminating false information on the Internet in an attempt to confuse the audience: Ministry of National Defense of Republic of China.

Taiwan's social media users claimed that the Chinese Air Force's plane Sukhoi Su-35 fighter plane crashed in Guangxi, an autonomous coastal region in southern China, bordering Vietnam. The plane was reportedly crashed after intruding over the Taiwan Strait and the South China Sea. A video of a plane crashing was also going viral.

The development came in the backdrop of China's warning to conduct military action against Taiwan. Last month, China threatened to conduct a "military mission" anytime till September 4 in the north of the Taiwan strait, provoking Taipei to warn Beijing against any attempt to annex the democratic island nation. Taking strong offence to the Chinese threats, Taiwan's President Tsai Ing-wen on Friday vowed to defend the island with a "solid" air force while unveiling the island's US-backed maintenance centre for a fleet of upgraded F-16 fighters.

(The above story first appeared on LatestLY on Sep 04, 2020 04:49 PM IST. For more news and updates on politics, world, sports, entertainment and lifestyle, log on to our website latestly.com).