France’s Yellow Vest Protests: What is the Impact on the Country’s Economy?

The Yellow Jacket protests are having serious monetary consequences. French retailers have already lost about $1.1 billion since the protests first began on 17 November. 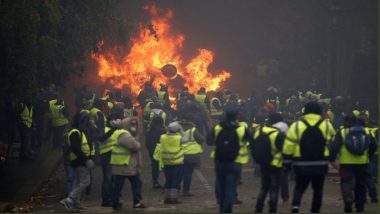 France's yellow jacket protests are having a serious impact on the economy (Photo: Twitter, armani_salado)

Pictures of yellow vested protesters protesting and rioting have filled the TV screens over the weekend. As over 1 lakh of them congregated in Paris, the city was brought to a halt.

Le Parisien newspaper reported that protesters in Paris damaged and burnt an estimated 50 vehicles, dozens of businesses were vandalised, with some of them even looted of their wares.

But the protests are having more widespread and serious monetary consequences. On Friday, the French retail federation told Reuters that French retailers had lost about $1.1 billion since the protests first began on 17 November.

City mayor Anne Hidalgo pleaded for an end to the Yellow Jacket riots, which have been going on for almost a month, where nearly 20 percent of the economy is related to tourism. Establishments like the restaurant and hotel trade have seen a decline in revenue between 20% and 50%.

The protests are bound to hit the tourism sector as Paris was visited by a record number of tourists in 2017 - more than 40 million, the Paris Tourism Office said last month.

According to another report, the continued protests could cost France’s Small and Medium-Sized Businesses an estimated $11 billion.

France's finance minister on Sunday pledged the government would help cover damages suffered by business during the latest Yellow Jackets riots, calling the destruction caused by protesters a "catastrophe for our economy."

The government will deliver a "very concrete and very direct" response to businesses affected by the violence, he said, adding: "The bills for the damages must be covered by the state, by solidarity, by the insurers."

President Emmanuel Macron - who many protesters want to stand down - will address the nation at 20:00 local time on Monday. He is expected to meet trade union and business leaders in the morning, according to union sources.

(The above story first appeared on LatestLY on Dec 10, 2018 07:51 AM IST. For more news and updates on politics, world, sports, entertainment and lifestyle, log on to our website latestly.com).