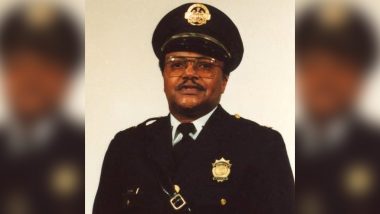 St Louis, June 2: A retired police captain of St Louis was killed in the wee hours of Tuesday while attempting to prevent a burglary attempt in the city. His demise is the fifth death reported amid the nationwide unrest over the killing of George Floyd. The deceased, identified as David Dorn, had retired as the chief of St Louis Police in 2008. Who Was George Floyd? Why Was He Detained? Here's Why the Death of the 46-Year-Old African-American in Minneapolis Sparked Violent Protests in US.

Post-retirement, he was serving as the police head of Moline Acres, a small-town in Missouri. Dorn responded to a midnight alarm raised by a pawn shop owner at Lee's side, after the outlet was reportedly being looted by an alleged group of protesters.

Responding to the alarm, Dorn left for the sidewalk in front of Lee's Pawn & Jewelry in north St. Louis around 2:30 a.m, said his bereaved wife. As a dutiful law enforcement official, he wanted to prevent a shop owner from facing massive loss due to the burglary, she said.

United States President Donald Trump led the nation in condoling the demise of Dorn, calling the 77-year-old a honourable police officer who should be lauded by all Americans.

Our highest respect to the family of David Dorn, a Great Police Captain from St. Louis, who was viciously shot and killed by despicable looters last night. We honor our police officers, perhaps more than ever before. Thank you! pic.twitter.com/0ouUpoJEQ4

"Our highest respect to the family of David Dorn, a Great Police Captain from St. Louis, who was viciously shot and killed by despicable looters last night. We honor our police officers, perhaps more than ever before. Thank you! (sic), he said.

Another police officer in Las Vegas was critically injured after being allegedly shot by a group of protesters near the Vegas Strip on Monday. He was stated to be critical till the late hours on Tuesday. "This is a sad night for LVMPD family and a tragic night for our community," LVMPD Sheriff Joe Lombardo said at a news conference.

(The above story first appeared on LatestLY on Jun 03, 2020 08:53 AM IST. For more news and updates on politics, world, sports, entertainment and lifestyle, log on to our website latestly.com).