India at UNGA: From PM Narendra Modi's Address Timing to Details About Live Streaming and His Meeting With US President Joe Biden, Here's Everything You Need to Know

From live streaming of PM Modi's UNGA address to his itinerary, here's everything you need to know. 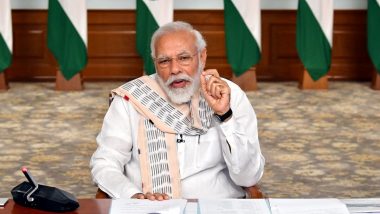 New Delhi, September 21: India's Prime Minister Narendra Modi will visit the United States this week to participate in QUAD Leaders' Summit. PM Narendra Modi will also address the General Debate of the High-Level Segment of the 76th Session of the United Nations General Assembly (UNGA). During his three-day, PM Modi is scheduled to meet US President Joe Biden and Vice President Kamala Harris. From live streaming of PM Modi's UNGA address to his itinerary, here's everything you need to know. PM Modi's Speech at UNGA Most Awaited Among World Leaders, Says Tirumurti.

PM Narendra Modi in US: As per the schedule, PM Narendra Modi will arrive in Washington D.C. late on September 22. He will hold a series of meeting with several leaders and senior officials during his three-day visit to the US. PM Narendra Modi to Visit US to Attend First In-Person Quad Leaders' Summit, Address UNGA High-Level Segment.

On September 23, PM Modi is scheduled to meet American CEOs, including Apple's Tim Cook. After this, he is likely to hold discussions with US Vice President Kamal Harris.

QUAD is an informal cooperation group between India, US, Japan and Australia. On September 24, PM Modi would be participating, along with Prime Minister Scott Morrison of Australia, Prime Minister Yoshihide Suga of Japan and President Joe Biden of US, in the Leaders' Summit of the Quadrilateral Framework.

PM Narendra Modi will meet US President Joe Biden on September 24 during the QUAD Leaders' Summit. This will be their first meeting after Biden became the President. After QUAD Leaders' Summit, PM Modi will hold bilateral meeting with Biden. Following, this he will leave for New York for the address at UNGA.

PM Narendra Modi is scheduled to address the UN General Assembly (UNGA) in person on September 25 at the start of the day's session at 9 am New York time. In India, PM Modi's UNGA speech will be live streamed from 6:30 pm onwards.

When and Where to Watch Live Streaming of PM Narendra Modi UNGA Address?

The live streaming of PM Narendra Modi's address at the UNGA will be available to watch on September 25 from 6:30 pm onwards (Indian Standard Time). One can watch the live telecast on the official website of UN or UN Web TV. Here's a direct link to watch PM Modi's speech at 76th UNGA. UN's YouTube channel will also host the live streaming.

The theme for this year’s General Debate is "Building Resilience through hope to recover from COVID-19, rebuild sustainably, respond to the needs of the planet, respect the rights of people, and revitalise the United Nations".

(The above story first appeared on LatestLY on Sep 21, 2021 11:48 AM IST. For more news and updates on politics, world, sports, entertainment and lifestyle, log on to our website latestly.com).