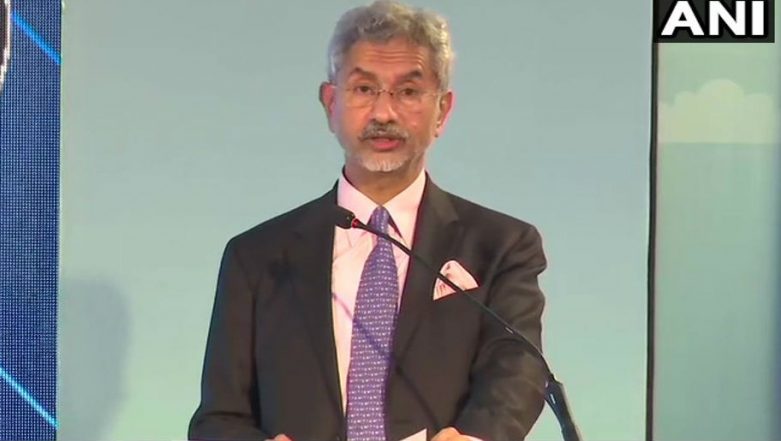 Male, September 3: External Affairs Minister S Jaishankar on Tuesday said that Indo-Pacific is the logical step after Act East for India. "The Indo-pacific is not tomorrow's forecast, but yesterday's reality. The Indo-Pacific naturally means different things to different powers, but it is undeniably a priority for all of them. For India, it is the logical step after Act East and a break out from the confines of South Asia," Jaishankar said during his address at the Indian Ocean Conference here. EAM S Jaishankar Hosts Dinner for Ambassadors, Heads of Missions.

"For Japan, the movement into the Indian Ocean is the key to its strategic normalisation. For the United States, a unified theatre, aggressive burden-sharing requirements...and the stakes are high for China as well because its naval capabilities are indeed a prerequisite to its emergence as a global power. The ASEAN is the latest to make its move in this regard and it has tabled an approach on the Indo-Pacific as well," he continued.

"What we can no longer doubt that this is unquestionably the era for the contemporary version of the Great Game where multiple players with diverse ambitions display their strategic skills," said the EAM. "The Indo-Pacific may be a fashion as a strategic concept right now, but the fact is it has been an economic and cultural reality for centuries. after all Indian and Arabs have left their imprint all the way up to the eastern coast of China.

In fact, this reality is not remote at all and the seamlessness of waters only sharpens the appetite of western powers who enter it," he added. "The British empire operated its own version of the Indo-Pacific even if it was not free or open. Its visualisation of both resources and interests was a cross integrated zone explaining many of the events of the 19th and 20th century.

Other powers, in turn, followed the approach of the dominant one. If Indian troops fought in the Boxer Rebellion of 1901, the Japanese marines too intervened in Singapore in 1950. And not least it was the enormous logistical effort from India by the Anglo-American alliance that sustained China in its war against Japan after 1942," the EAM said. S Jaishankar, India’s External Affairs Minster, Holds First Press Conference After Taking Charge.

"Strengthening a sense of extended neighbourhood is part of India's reclaiming of history. Its cultural basis is so visible that it needs little affirmation whether it is Southeast Asia, Gulf or Central Asia," Jaishankar also stated. "Even its economic bases are now strengthening as trade, investment and mobility make an impact. What it lacks is that connectivity underpinning that was disrupted seven decades ago. As our connectivity, vision, and capabilities expand this critical road (Indian Ocean) can be played once again," he said.

"Giving the steady externalisation of its economy, and the shifting focus towards the East, India cannot remain unaffected by developments that impinge on the freedom of navigation or of overflight. The conceptual justification, therefore, centres around the expanding interests of India. It is buttressed by its self-perception as a rule-abiding power that contributes positively to global commerce," the EAM added.

"Given that its core interests are in the Indian Ocean, a presence beyond also contributes to ensuring a peaceful periphery. Since maritime activity has such a profound impact on overall equations, India's participation goes some way in contributing to a stable balance of power in Asia. While much of this advocacy would focus on the expansion of its interests, the fact remains that where India can really make a difference is in the Indian Ocean itself," said Jaishankar.

"For India, getting its Indo-Pacific approach right rests on ensuring that it gets its Indian Ocean strategy even more correctly," he said while also shedding light on the SAGAR initiative during his address. The EAM also threw light on India's comprehensive maritime strategy, adding that it can be best depicted through concentric circles in India's case.

"A comprehensive maritime strategy naturally has a spectrum of activities and these in India's case, are best depicted in terms of concentric circles. The core is constituted by a combination of the maritime infrastructure of the homeland, development of island assets, connectivity to immediate neighbours with littoral implications and capabilities which can be brought to bear on a daily basis," he said.

"The next circle includes the maritime space beyond India's waters and its immediate island neighbours like Sri Lanka, Maldives, Mauritius, and Seychelles...The outermost circle takes India into the Pacific, engaging convergent interests to ensure core security while promoting stable periphery," the EAM added.Jaishankar also talked about the Chabahar port during his address on Tuesday and outlined the sea access it can provide to Afghanistan.