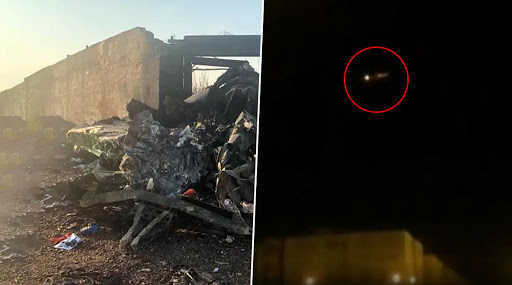 Tehran, January 11: Iran on Saturday admitted of shooting down the Ukrainian aeroplane and called this a 'human error' and 'accidental', confirmed Iran Foreign Minister Javad Zarif. Adding more, Iran stated that place was turning towards an IRGC military base, after which it was shot down accidentally. Videos of the ill-fated Ukrainian International airliner being shot down by Iranian military are circulating in the social media.

Confirming the 'human error', Iran Foreign Minister Javad Zarif took to Twitter on Saturday and wrote, "A sad day. Preliminary conclusions of internal investigation by Armed Forces: Human error at time of crisis caused by US adventurism led to disaster Our profound regrets, apologies and condolences to our people, to the families of all victims, and to other affected nations."

Our profound regrets, apologies and condolences to our people, to the families of all victims, and to other affected nations.

An official statement from Iran too arrived on Saturday stating that its military 'unintentionally' shot down a Ukrainian jetliner, due to which all 176 passengers aboard were killed. The jetliner -- a Boeing 737 operated by Ukrainian International Airlines -- took off hours after Iran military launched a barrage of missiles at US forces from Tehran. Ukraine Airplane Crash: Iran Finds Black Boxes From Crashed Ukrainian 737 Aeroplane, Says Aviation Authority.

Here are some of the videos and tweets shared by TIME and NYT journalists:

As per the details, the plane was carrying 167 passengers and nine crew members from several countries and was en route to the Ukrainian capital of Kyiv. In that plane, 82 Iranians, 63 Canadians and 11 Ukrainians were flying. The plane was shot shot down on January 8 night.

Amid the escalating tensions between Iran and United Sates following the death of Iranian Major General Qasem Soleimani on January 3 this year in Baghdad. Following this, United States had imposed several sanctions on Iranian leaders, while Iran had called all American soldiers as terrorists. Earlier on Friday, Secretary of State Mike Pompeo became the first American official to publicly confirm that that Iran had shot the Ukrainian airliner.