Iran, China and Russia have launched a joint naval exercise in the Indian Ocean, with the aim of boosting marine security, the Daily Mail reported. 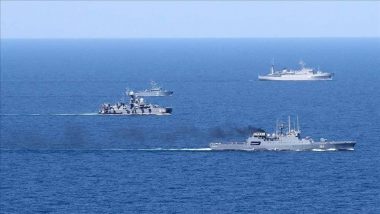 New Delhi, Jan 21: Iran, China and Russia have launched a joint naval exercise in the Indian Ocean, with the aim of boosting marine security, the Daily Mail reported.

Iran's state TV said that 11 of its vessels have been joined by three Russian ships, including a destroyer, and two Chinese vessels.

The military exercise comes at a time of heightened tension between Russia and the West over Moscow's build-up of some 100,000 troops on its border with Ukraine.

Russia is also being joined by China and Iran -- two nations which are at loggerheads with the West, with Beijing recently accused of sending a spy to the heart of the UK Parliament -- the report said.

The joint naval exercise will cover some 6,560 square miles (17,000 square kilometres) in the Indian Ocean's north, and include night fighting, rescue operations and firefighting drills.

"The purpose of this exercise is to strengthen security and its foundations in the region, and to expand multilateral cooperation between the three countries to jointly support world peace, maritime security and create a maritime community with a common future," Iran's Rear Admiral Mostafa Tajoldini, spokesman for the drills, told Iranian state TV.

This is the third joint naval drill between the countries since 2019. It coincided with a recent visit by Iran's hardline President Ebrahim Raisi to Russia.

"Improving bilateral relations between Tehran and Moscow will enhance security for the region and the international arena," Raisi said upon returning from Russia on Friday, the official IRNA news agency reported.

(The above story first appeared on LatestLY on Jan 21, 2022 06:45 PM IST. For more news and updates on politics, world, sports, entertainment and lifestyle, log on to our website latestly.com).