Incumbent Israeli Prime Minister Benjamin Netanyahu and his opponent Benny Gantz have both claimed victory in the general elections after results from three exit polls were released. 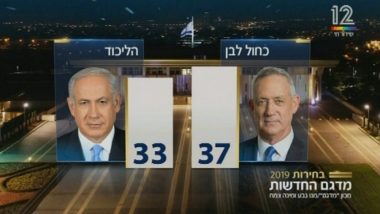 Toronto, April 10: Incumbent Israeli Prime Minister Benjamin Netanyahu and his opponent Benny Gantz have both claimed victory in the general elections after results from three exit polls were released.

Two out of three exit polls announced by Israeli TV channels showed Gantz's party taking more seats of about 36-37 in the Israeli Knesset, while a third poll showed Gantz’ and Netanyahu’s Likud parties reaching a tie. Official results of Israel's elections are expected to be announced sometime on Wednesday. But two of the polls also said that Netanyahu was in a stronger position to form a coalition government with the help of other right-wing parties.

Soon after the polls closed and as the exit polls were being announced, Gantz’ party announced its victory, "We won! The Israeli public has had its say!" But Netanyahu too claimed victory and said, "The rightist bloc led by Likud has won a clear victory," Netanyahu said in a statement, "I will begin forming a right-wing government with our natural partner this very night."

Both leaders would require to form alliances to reach the 61 mark in the 120 member Knesset.

But Gantz has already given an extended victory speech to his supporters in which he said he expected the President to invite him to form the government after the official results were announced. Gantz said, “In elections there are losers; in elections there are winners; and we are the ones who won. We might be new, but we aren’t clueless. We understand that we will wait for the real results, which will gradually develop in our favor as well, and we will work in the next few days on what is necessary so as to form as broad a government as possible.”

He also promised to be “the prime minister of everyone, and not only of those who voted for us,” which seems to be a clear message to smaller parties from which he would need support if called upon to form the government. He added, “ No one from a party other than ours should be worried today. The only thing that people should think about is what is the common denominator between us, where we can connect, and about a basis of common understanding.”

(The above story first appeared on LatestLY on Apr 10, 2019 05:10 AM IST. For more news and updates on politics, world, sports, entertainment and lifestyle, log on to our website latestly.com).