Israel launched new airstrikes against the Gaza Strip, and the Islamic Hamas movement, which controls the coastal enclave, unleashed fresh rocket attacks against the Jewish state overnight and on Tuesday, in one of the worst escalations between the two sides in recent years. 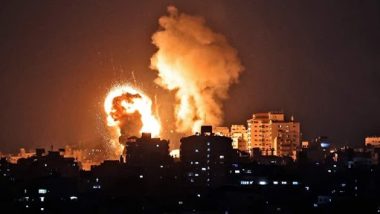 Jerusalem, May 11: Israel launched new airstrikes against the Gaza Strip, and the Islamic Hamas movement, which controls the coastal enclave, unleashed fresh rocket attacks against the Jewish state overnight and on Tuesday, in one of the worst escalations between the two sides in recent years.

According to Israel's emergency health services, at least six civilians were injured by rocket fire in the southern city of Ashkelon.

The Al-Qassam Brigades, the military wing of Hamas, said the shelling of Ashkelon was retaliation for the Israeli army attacking a residential building in the western part of the Gaza Strip.

Israel has fired around 130 rockets at targets in the Gaza Strip so far, and an estimated 15 members of Hamas and the Islamic Jihad group have been killed, an Israel Defense Forces (IDF) spokesperson said.

The IDF tweeted that groups in Gaza had been firing rockets "non-stop" for 10 hours.

The sharp escalation began at 6 p.m. on Monday after Hamas set an ultimatum for Israel to withdraw its forces from the Al-Aqsa Mosque compound, where hundreds of Palestinians were injured in clashes earlier that day.

Following the deadline, Hamas fired some 200 rockets towards Israel, dozens of which were intercepted by Israel's anti-rocket Iron Dome system, the military said.

The military added that schools have been shut in communities located within 40 km of the Gaza Strip.

Furthermore, Arab protesters burned tires and threw stones and fireworks at police forces in northern Israel, and at least 46 people were arrested, according to the Israeli police.

In Lod, a city southeast of Tel Aviv, a 25-year-old Arab man was shot and killed during the riots, and a 34-year-old was later arrested, police said on Tuesday.

The suspect is a Jewish resident of the city, according to media reports.

The conflict between Israelis and Palestinians has escalated in recent days.

At the weekend, hundreds were injured in serious clashes at the Jerusalem holy site, known as the Temple Mount to Jews and the Noble Sanctuary to Muslims.

(The above story first appeared on LatestLY on May 11, 2021 04:42 PM IST. For more news and updates on politics, world, sports, entertainment and lifestyle, log on to our website latestly.com).