Malaysian Prime Minister Muhyiddin Yassin said on Sunday that the COVID-19 restrictions imposed in the country due to the pandemic has now been extended to June 9. 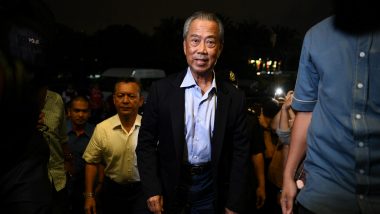 Kuala Lumpur, May 10: Malaysian Prime Minister Muhyiddin Yassin said on Sunday that the COVID-19 restrictions imposed in the country due to the pandemic has now been extended to June 9.

In a televised address, Muhyiddin said the decision was made to allow economic activity while keeping the pandemic in the country under control, reports Xinhua news agency.

He said the decision to ease some of the restrictions on most economic activities from May 4 under the "Conditional Movement Control Order" had been conducted in a smooth and orderly manner in the past week.

"Many among us have started to work. Until today an estimated 6.64 million, or 43.6 per cent of the workforce, have returned to work. I expect this number to increase in the coming weeks," he said.

Muhyiddin said the government's measures, including the implementation of Movement Control Order since March 18, had achieved success with 94.4 per cent of district having been categorized as green zones, where no active cases have been recorded for two weeks.

However, he cautioned against celebrating too soon and warned about the risks after the easing of restrictions and the reopening of economy.

He called on businesses and citizens to follow the government's standard of operations (SOP) as well as paying attention to personal hygiene.

"I appeal to everyone to abide by the SOP. It's not difficult. Avoid crowded places, ensure social distancing, wear masks, sanitize and wash your hands, and go out only when necessary," he said.

Malaysia first implemented the restrictions on March 18 before relaxing it from May 4.

But activities involving mass gatherings or those would increase the risks of infections are still not allowed.

Muhyiddin stressed that interstate travel was still banned, including returning to hometown to celebrate Eid later in the month, but couples who are working in separate states would be allowed to travel across state borders.

The number of fatalities remained unchanged at 108, with no new reported deaths.

(The above story first appeared on LatestLY on May 10, 2020 04:45 PM IST. For more news and updates on politics, world, sports, entertainment and lifestyle, log on to our website latestly.com).